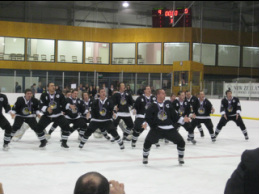 I made the trip of my life when I travelled with my father to Dunedin, New Zealand for the Division III world championships. The teams in the tournament were the host New Zealand, Ireland, Greece, Turkey, Luxembourg and Mongolia. At the first evening we went to a super market to buy some food. It felt quite bizzarre thinking that I have travelled to New Zealand and when I walk to grocery store, almost the first people I see there are two old man wearing "Hellas Ice Hockey" sweat suit.. They looked like they were characters from a sketch comedy show.

Next day the first game of the tournament was supposed to be Turkey-Mongolia at 1 o'clock but nothing was happening in the rink. Few moments later the Turkish team came to ice to practise. I asked someone "Where are the Mongolians?" He said that they couldn't get visas to New Zealand...

At least I could see the final tournament of Luxembourg defenceman Rafael Springer. He was 50 years old during the tournament and the oldest national team player in history. He is also the world's oldest point scorer when he collected one assist in 2005 Div III WC when he was 46 years old. He had no visor in his helmet and he used wooden Jofa stick. A scene I had to travel to New Zealand to witness. Priceless. Luxembourg finished 3rd so it was the best possible result for him and Luxembourg as Turkey and New Zealand were way too tough opponents.

New Zealand had hard times only against Greece when they were forced to overtime where NZ picked up 2 points for 4-3 victory. Another scene which made the whole trip worth making was this: the legendary Haka. New Zealand performed it before every game but against Ireland they made it after the game. The reason was that back in 2007 when the Div III tournament was played in Ireland, the Irish turned their backs to the Kiwis performing the Haka.

Despite the Irish didn't have to see the mighty Haka, the Iceblacks sent them home beating them 9-0 in the final game of the tournament. New Zealand won the tournament and Ireland finished last losing all their games. The Turks beat Greece in the final day 7-1 and earned silver medals and promotion for 2010 division II. That left Greece out of the podium to 4th place.

The quality of the photos below isn't the best possible but I hope you enjoy them.