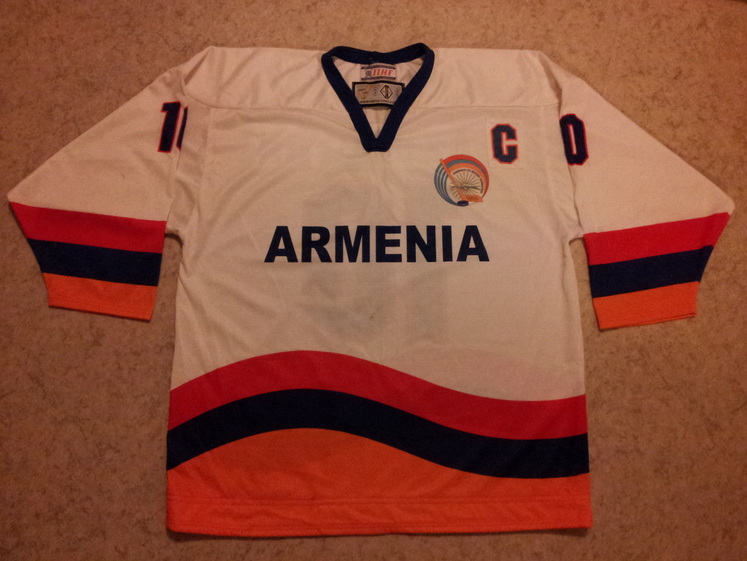 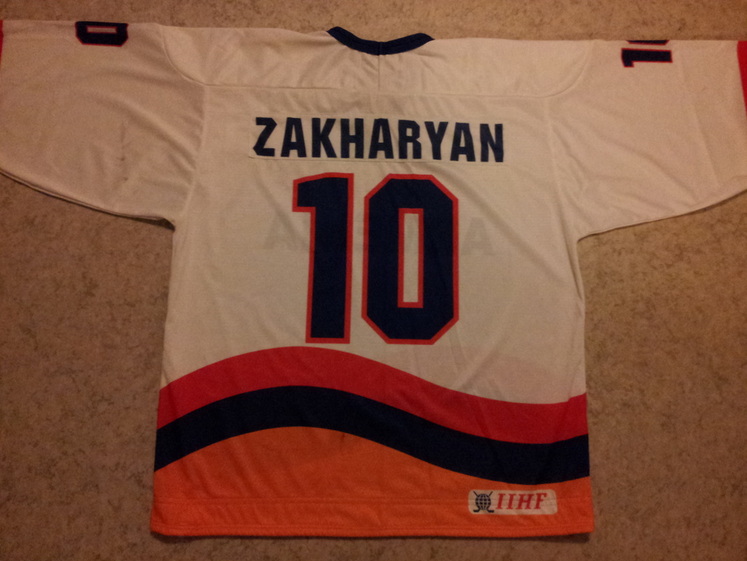 This extremely rare Armenian ice hockey national team game worn jersey was used by Samvel Zakharyan in 2005 Division III World Championships in Mexico City, Mexico. Zakharyan was captain of perhaps the worst senior World Championship team in history. Armenia showed up with only 3 lines and lost their all 4 games in the tournament with unimaginable goal difference 5-142.

Zakharyan got 34 penalty minutes, 0 points and -46 in his +/- rating. Armenia used only white jerseys in the tournament and the results were something which doesn't belong to any division.

In the game vs Mexico, the hosts outshot Armenia 121-8. Zakharyan got "only" -17 whilst the worst numbers were gathered by Raffi Kajberouni, -35.
Only 4 Armenian players had worse +/- in the tournament than Zakharyan the worst being as much as -81. Games between other teams were rather tight and no game ended with more than 5 goal margin. Considering that it's unbelievable how weak roster Armenia sent to the tournament although they didn't have a full roster. Actually there are 3 players, 1 F and 2 D who didn't play at all because they have 0 in their +/-.

Against Mexico they skated 8 forwards and 7 defencemen of which one didn't play at all or he was very lucky for not being on ice when Mexico scored. That player, Ghukas Khachatryan and also Vahram Sargasyan only got -2 in the whole tournament which were the lowest among of those who played in Armenian team. The best +/- after those was -14.

In 2006 Armenia did much better in Division III and one proof of that was their victory over Ireland 6-0. Over half of their roster was changed but in 2007 Armenia withdrew their team because they had some issues with non-eligible players. Armenia returned in 2010 when they hosted the other group of Division III but their results were forfeited due to eligibility issues. Armenian national team haven't played in World Championships since that tournament.

When I noticed the existence of lower divisions first time in 2007, I could only wonder what on Earth was happening in Mexico during this tournament because the results were so ridiculous compared with other Division III tournaments in that decade. Later after I started collecting jerseys I was only hoping I could get myself a jersey worn in those games and here it is. The design of the jersey is quite sedated but what has been experienced wearing this jersey in that tournament is something words can't desribe properly. At the same time the captain has been feeling proud and shame when representing his country and the feel of wanting to dissappear off the ice when every opponent humiliates them.

But no matter how bad a team does, one should always respect their efforts and players when they are doing their best. Especially when playing for the national team.

The jersey has plenty of puck marks in the front, back and the sleeves. There's also some red paint from the boards in the right shoulder and sleeves. All numbers and crests are sublimated. The nameplate and captain's 'C' are sewn with individual letters sublimated. The jersey is made by Tackla. 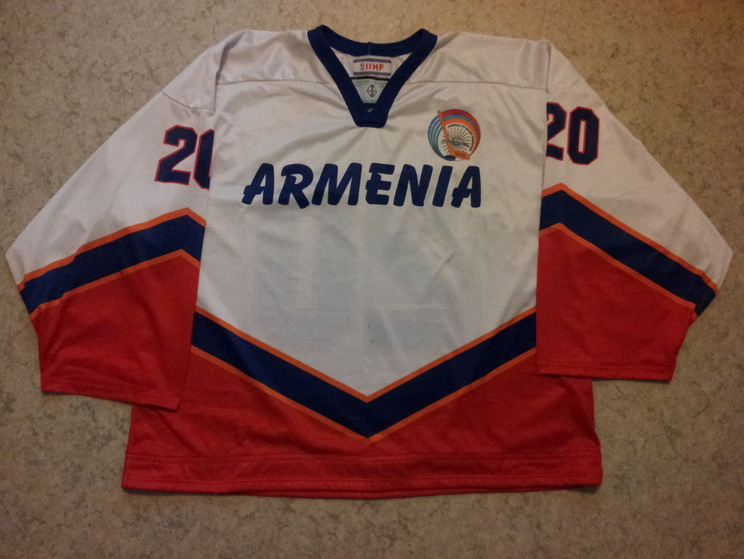 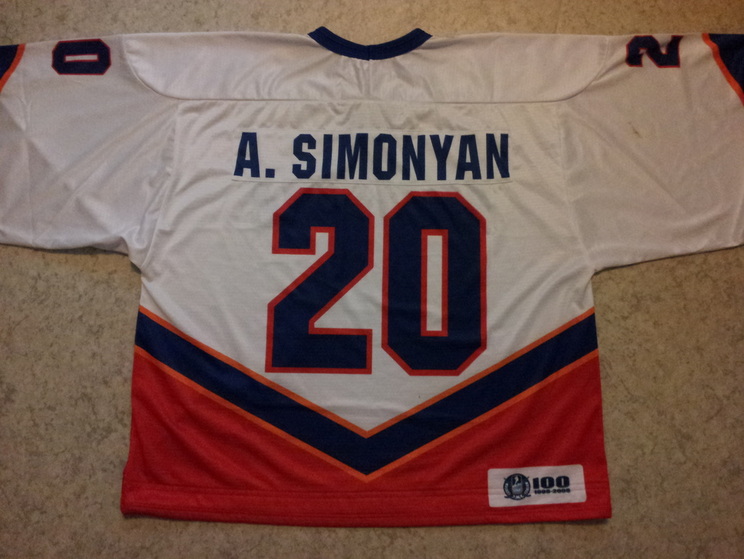 Yet another game worn jersey from the very rarely seen Armenian national team. This jersey was used by goaltender Artur Simonyan in 2008 U18 Division III group B World Championships in Izmit, Turkey. Armenia continued to perform with very weak results as their reputation as the worst national team in the 2000's would suggest. Armenia played four games in the tournament and the results didn't give much to be told to the future generations.

Hence the total goal difference was shocking 1-87. Armenia used white jerseys against Turkey, Serbia and Iceland. When facing Turkey, Simonyan was substituted in around 45 minutes of play when Turkey had scored the 21-0 goal.

Simonyan was the starting goalie against Serbia but that game last only 5 minutes for him. After allowing 4 goals without a single save in the game he was replaced by Vachagan Habetyan.

In their final game against Iceland Simonyan was the backup goalie but he was changed in during the 1st period a minute after Iceland had moved to 8-0 lead. He made 24 saves and allowed 15 goals in the game. In the whole tournament he allowed 22 goals on 62 shots and thus his saves % was very modest 64,52. This was his first and last tournament in Armenian national team.

Armenia's roster included only 16 skaters and 2 goalies but when taking a look at their plus minus rating, it shows that they have mainly played using two lines. Six players have the +/- rating -36 or worse the worst being unbelieveable -71. There are few players whose rating is -1 and one whose rating is -7. Also one player has 0 in plus minus and he also has registered shots on goal. There are four players who doesn't have anything in their stats column and that means that they have been sitting in the bench throughout whole games. Also errors by the people who made the statistics are possible.

It's also remarkable that only 5 players could produce shots on goal. In the whole tournament they only had 21 shots on goal in 4 games. 5 shots per game won't win you many hockey games.

The jersey has very good amount of wear in the front and on the sleeves. There's one finger tip sized hole in the right shoulder near the neck hole. All numberings and crests and sublimated onto the jersey, including the IIHF 100 years anniversary patch because these jerseys were made for this tournament and weren't used in previous year's tournaments. The nameplate is sewn with individual letters sublimated onto it. The jersey is made by Tackla. 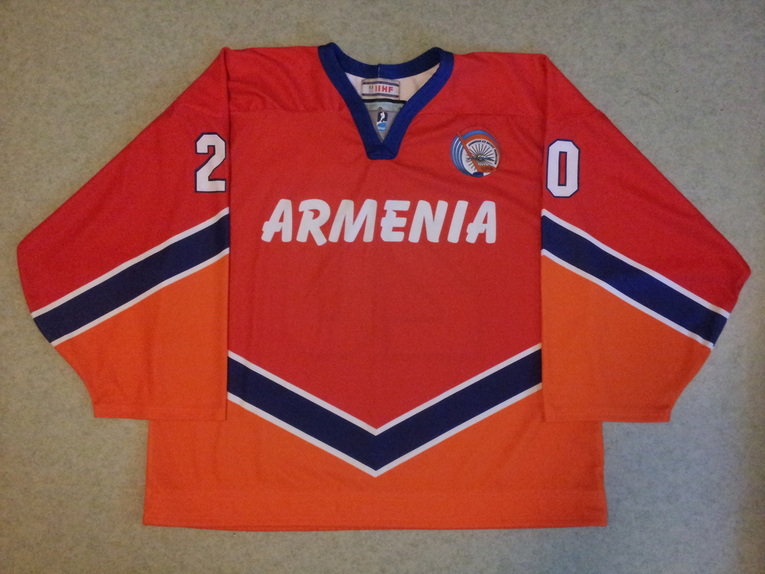 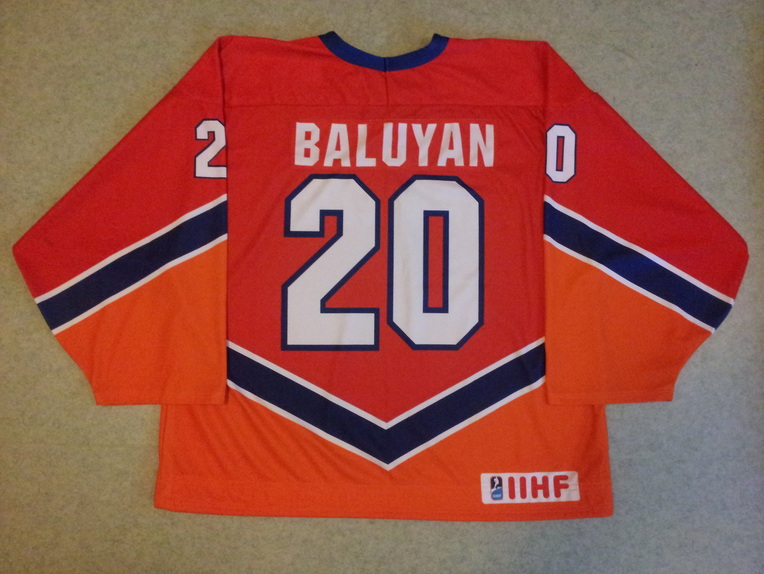 This Armenian bench or game worn jersey was used by goalie Harutyun Baluyan in the currently last World Championship Armenia has been allowed to participate, 2010 Division 3 group B World Championships in Yerevan, Armenia.

For the first time there was two Division 3 groups instead of one group. The participating teams in Yerevan were Armenia, North Korea, Mongolia and South Africa. All teams faced each other once in round robin and top 2 teams played a gold medal game and 3rd and 4th teams played a bronze medal game. Armenia won South Africa 9-2, won North Korea 7-6 and won Mongolia 15-0.

Armenia played against North Korea in the gold medal game but this time North Korea was better 5-2 and earned promotion. After the tournament the IIHF found out that Armenia used once again players who were not eligible to represent Armenia and all of their games were forfeited. All the official statistics from the tournament involving Armenian team were deleted from the IIHF's website, even their roster.

According to Wikipedia, Baluyan was named on the team roster but on another source where was listed the final roster for the tournament, Baluyan was not included. There is a video clip from the gold medal game against North Korea where is shown the back up goalie #20 but his name is not clear. The nameplate is longer so it can't be Baluyan. The video shows some fans and one fan is wearing this colored jersey with #20 and Baluyan in the back. Baluyan have played in Armenian U18 and U20 national teams and the striping on the cuffs on that jersey is vertical, not diagonal as in this jersey, the jersey the fan is wearing is from those junior tournaments. Check out the video below.

The silver colored fabric on the neck was introduced to lower division jerseys in 2009 and Armenia didn't play in any tournament then. The jerseys are likely ordered then and it was prepared for Baluyan had Armenia played in 2009.

The jersey has some minor wear so it has been used somewhere, in practise or warm up, I can't tell for sure. The nameplate is sewn with individual letters sublimated onto it. All numbers and crests are sublimated. The jersey is made by Tackla.
Return to IIHF jerseys A-D