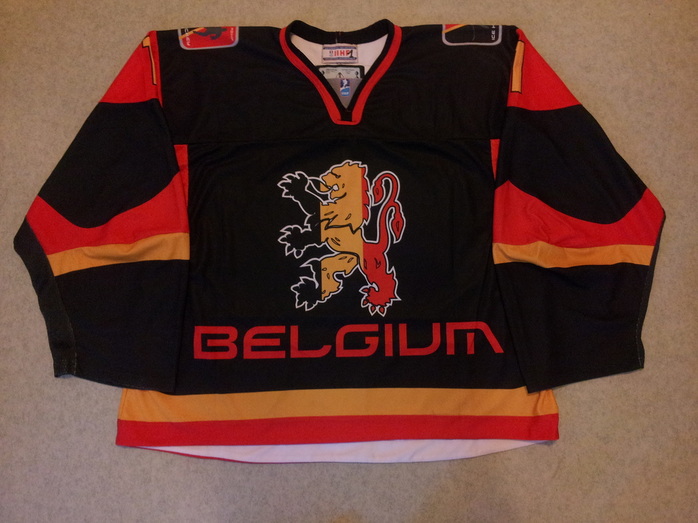 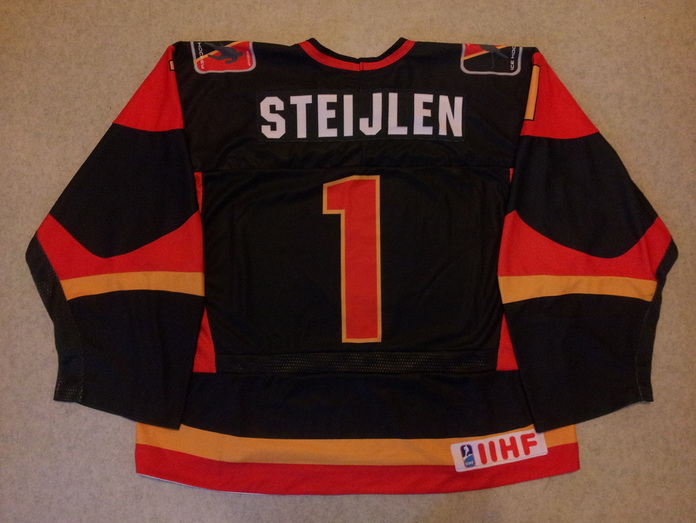 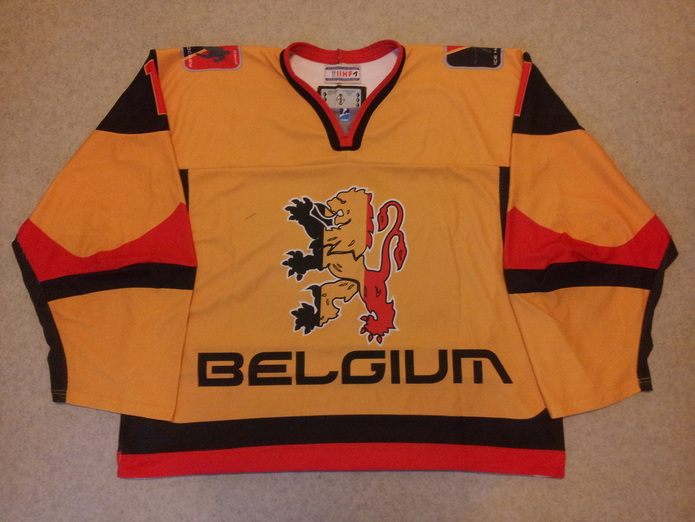 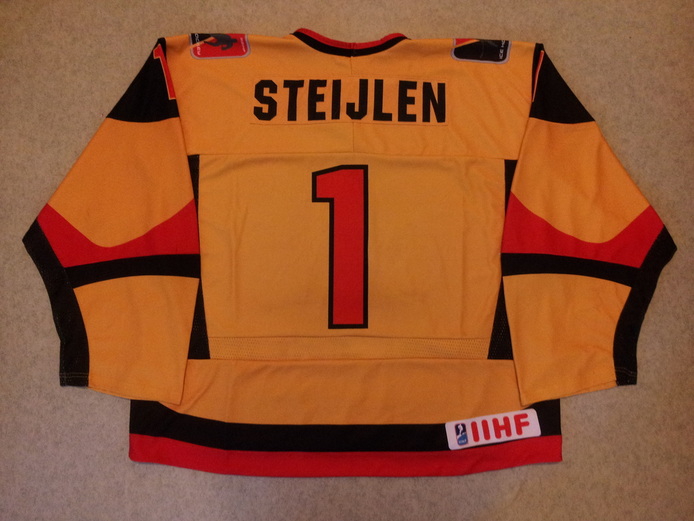 These two are the last jerseys used by legendary Belgian national team goalie Bjorn Steijlen in 2013 and 2014 Division 2A World Championships. His first national team appeareance happened already in 1996 Pool D World Championships. In 2003 Steijlen allowed only 7 pucks behind him and the backup goalie Arnaud Cremer only 1 and lead Belgium to Division 1 for the first time since 1955 when Belgium last time played in Pool B or Division 1.

Steijlen played in all except 1 game in 2004 Division 1 World Championships where he and Belgium faced Norway, Belarus, Great Britain, The Netherlands and Hungary. Belgians were overrun 0-10 by Belarus in their first game but in next game Belgium was close to upset Hungary. Belgium lead 4-3 in the second period and the teams entered 3rd period in 4-4 tie. Hungary won the game 6-4 and Steijlen made 44 saves while Hungarian goalie Krisztian Budai stopped only 16 shots.

Remaining games were blowout losses to The Netherlands 2-11, Norway 1-11 and Great Britain 0-6. 0 wins sent Belgium back to Division 2. Steijlen's SVS% was only 81,9 which was worst among the goalies who played more than 40% of the games.

Steijlen's last two World Championships were 2013 and 2014 Division 2A tournaments. In 2013 Belgium set a huge surprise and won silver medal greatly thanks to Steijlen. He allowed only 11 goals and his SVS% 93,45 was the best in the tournament. He was also nominated as the best goaltender of the tournament.

2014 wasn't as successful tournament for Belgium as year earlier. Belgium won only 1 game in regulation and 1 in OT. After Belgium's last game against Estonia, which Estonia won 6-1, Belgium had to cross their fingers for Israel not to win Iceland. Belgium and Australia had 5 points each and Israel 3. Three or two points for Israel would have dropped Belgium to last position and relegated them to Division 2B. If Israel won after regulation, all three teams would be at 5 points and then Belgium would be relegated. The last game of the tournament was Serbia-Australia and in previous scenario, Australia would have to earn at least a point to save Belgium from relegation.

Israel took 3-2 lead in early 2nd period and those numbers were on the scoreboard painfully long for Belgians. Iceland's Robin Hedström became half-honour citizen of Belgium when he equalized the game at 56.37. That took the game to OT but the Israeli's could still send Belgium down. The OT was scoreless and the relegated team would be decided in the shootout. Israel started the shootout contest and their two first shooters failed as did the first shooter of Iceland.

Emil Alengard scored as a 2nd shooter of Iceland and it all came down to Israel's 3rd shooter, Oren Eizenman. He must score to keep his team alive but he hit the post which sealed the deal: Israel faced relegation and Belgian players could stop eating their fingernails and start celebrating. Alengard and Hedström didn't probably have to pay for any of their drinks during the following night.

Had it ended to Israeli victory, watching the Serbia-Australia would have been a true nightmare. Everything seemed to go perfectly for Belgians as the game remained scoreless almost till the end and Australia was gaining that all important one point. At 57.15 the Belgians' world would have crashed when Serbia took 1-0 lead which was the final score. Thankfully for the Belgians that game didn't matter for them.

Steijlen allowed 20 goals in the tournament and he was ranked only 6th with SVS% 87,88. The black jersey was used against Estonia in which Steijlen allowed 5 goals. Backup goalie Jean Cornelis was substituted in after Estonia's first goal in early 2nd period. Estonia scored quickly 2nd goal and shortly after that Steijlen was back between the pipes.

That was the last game of his long career in men's national team starting back in 1996 during which he represented Belgium in 18 World Championships missing only 1 tournament, in 2010. He was starting goalie in vast majority of the tournaments.

Especially the yellow jersey is full of puck marks and there are something also in the black jersey, from which the puck marks are naturally tough to see but both jerseys have seen a ton of action. The jerseys were obtained from the Royal Belgian Ice Hockey Federation.
Return to IIHF jerseys A-D