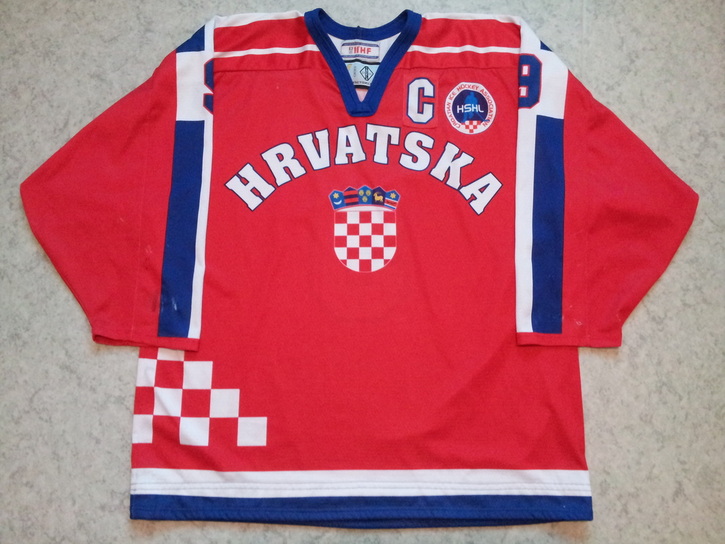 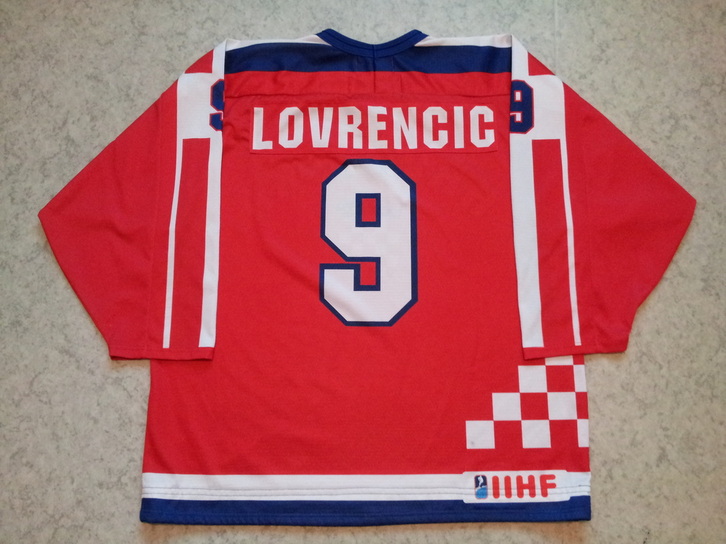 This beautiful red team Croatia national team jersey was worn by their long serving captain and one of the best players in the country, Marko Lovrencic. The jersey was used in 2007 Div II WC hosted by Croatia which Croatia won and gained promotion to 2008 Div I WC hosted by Japan.

In 2008 Croatia travelled in Japan their goal being avoid relegation. Croatia succeeded in their goal by beating Estonia in Game Winning Shot competition. Croatia was all but easy opponent for the expected better quality teams. Croatia lost to Ukraine 0-4, Japan 0-3 and Hungary 0-3. Hungary which would win the whole tournament and gain promotion to 2009 World Championships first time for 70 years was struggling against Croatia until after 35 minutes of play they managed to beat the Croatian netminder Vanja Belic. Belic's brother Sasa's jersey can be found under this story.

Croatia also lost tightly 3-4 to Lithuania. The jersey was used in games against Ukraine, Estonia (W 2-1 in GWS) and Lithuania. Lovrencic scored the tying goal in the late of 2nd period against Estonia. That goal was his only point in the tournament.

The jersey was recycled to next autumn's Olympic Pre-Qualification tournament in Budapest, Hungary. The jersey was used only in game against the host Hungary (L 1-6). Other games were against Lithuania (L 2-4) and Serbia (W 5-1). Lovrencic scored 1 goal and 2 assists in the tournament.

During the 2011 Div II WC hosted by Croatia, Lovrencic became the all time best point scorer in Croatian national team when he past the then-record holder Mato Mladenovic, who was perhaps the most popular player among fans. Mladenovic scored 27+21=48 points in 57 games whilst Lovrencic has already scored 31+31=62 points in 55 games (situation after 2013 WC tournament) and his career keeps still going on.

The jersey has great amount of puck marks, holes and board burns in the sleeves and there are few puck marks in the lower backside. There are clear marks of the IIHF 100 years -celebration patch used in 2008 WC but it was removed because the jersey was recyled to Olympic Pre-Qualification tourament. 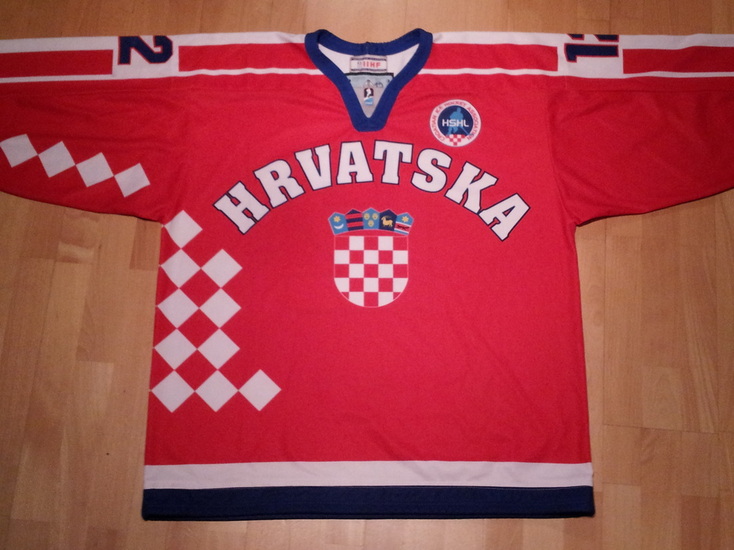 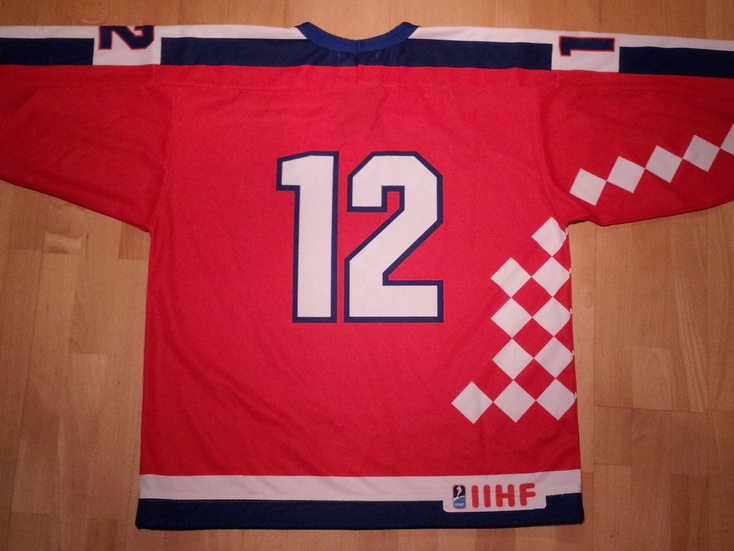 This red team Croatia jersey was worn by the senior national team defenceman Sasa Belic in 2009 and 2010 Div I World Championships in Lithuania and Slovenia. The name plate has been removed and according to the stitch marks it have had another user also. The story of how I got the jersey is more than unique.

When I was in Croatia spectating the 2011 Div II world championships I met a local journalist. We talked very much about Croatian hockey and kept in contact after the tournament. He said he could arrange me a Croatian game worn jersey and as a counter favor he asked me to send him two t-shirts of my favourite team in Finnish League.

I was very frustrated of this despite my financial losses weren't too big.

Next spring I was in Iceland spectating the 2012 Div II WC. I finally got in contact with the scammer and he said I could ask some Croatian players if they could give me their jersey and he would pay that player back. Some players knew the journalist so I was quite hopeful. I told one player what had happened and he said he will definitely give his jersey but he had to ask the team manager if that's ok.

Unfortunately it wasn't because Croatia would use the same jerseys in the Olympic qualifications. At that point I thought that was it. The scammer won.

In September 2012 Croatia would host the first Olympic qualification tournament in Zagreb. I noticed that a friend of mine would be a linesman in the tournament. I contacted the same player I talked with in Iceland and asked if he have any older jerseys he could arrange.me. He wasn't sure if he would play there.

I contacted another player who I had talked with in Croatia in 2011 and explained him the situation and he said he can arrange this. The linesman sent me a message during the tournament that he got a jersey. Free of charge.

I picked up the jersey at the same week when he was officiating a Finnish league game on Friday.

Guess the date? Yep, Friday 14th September. Exactly one year later when I was told I would receive the jersey.

All numbers and crest are sublimated. The jersey is made by Tackla.
Return to IIHF jerseys A-D