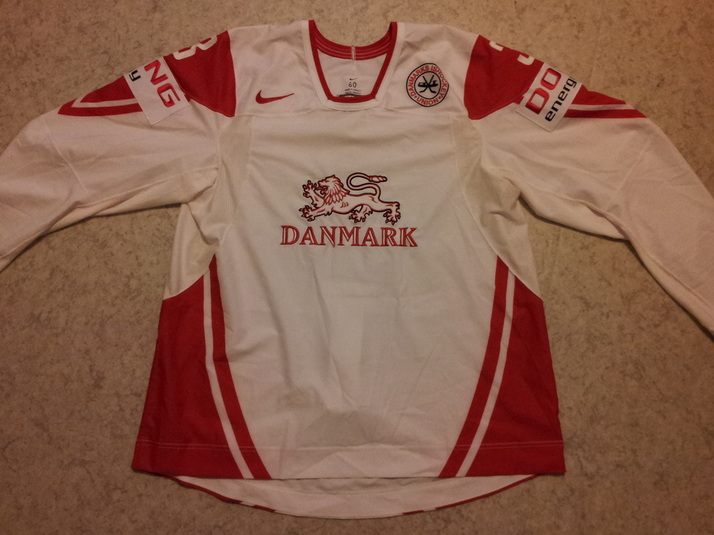 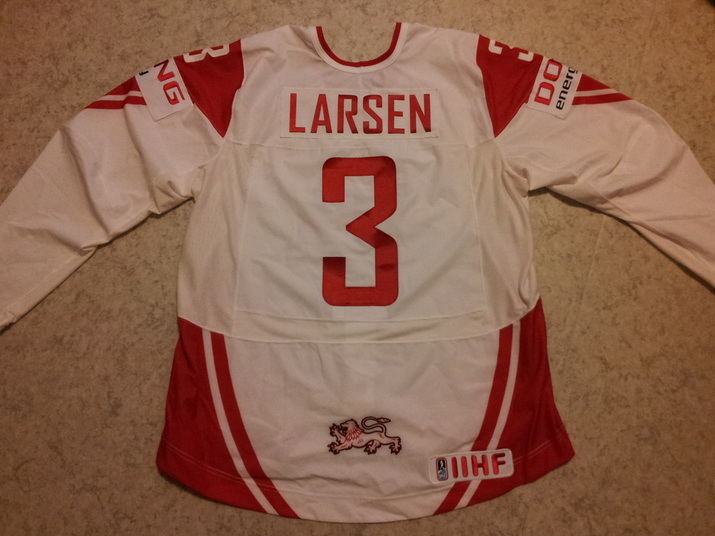 This is a game worn national team jersey of Danish NHL-defenceman Philip Larsen worn in 2012 World Championships in Finland and Sweden. Denmark was in the Stockholm group and played all of their games there. Denmark's tournament was a disaster and they couldn't get a bye to quarter finals. Only the victory over Latvia in second to last round saved Denmark from relegation.

Larsen played all 7 games in the tournament scoring 0+2 and -6. The Dane had clearly most time on ice in his team, 25:05 per game.

Larsen played for Lukko Rauma during the NHL lock out in 2012-13 season scoring 15 points in 27 games. He is Dallas Stars' 5th round pick in 2008 draft. He currently plays for NHL's Edmonton Oilers.

Despite he played great minutes in the tournament, the jersey has very few wear. Only some puck marks in shoulders and sleeves.

The numbers, front crest, Nike logo, IIHF and DONG sponsorship patches are sewn. The lion crest in the back and Danish Ice Hockey Association patch on the front are sublimated. The name plate is sewn and individual letters are heat pressed. There are mesh in the arms and armpit area. The jersey is made by Nike. 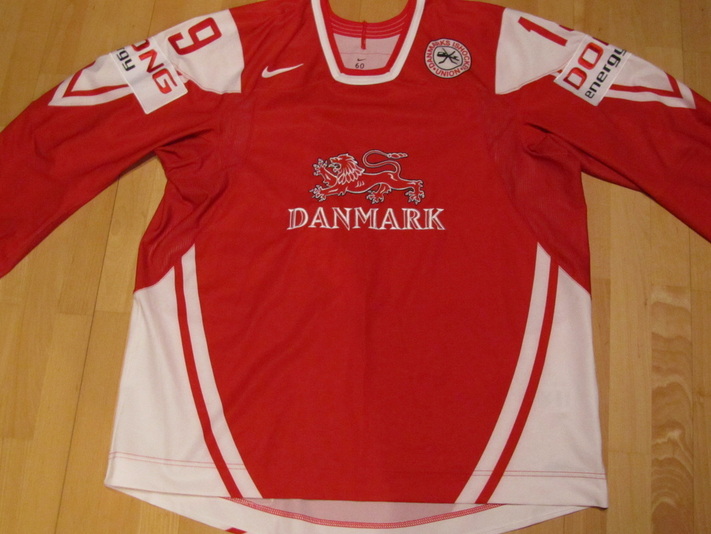 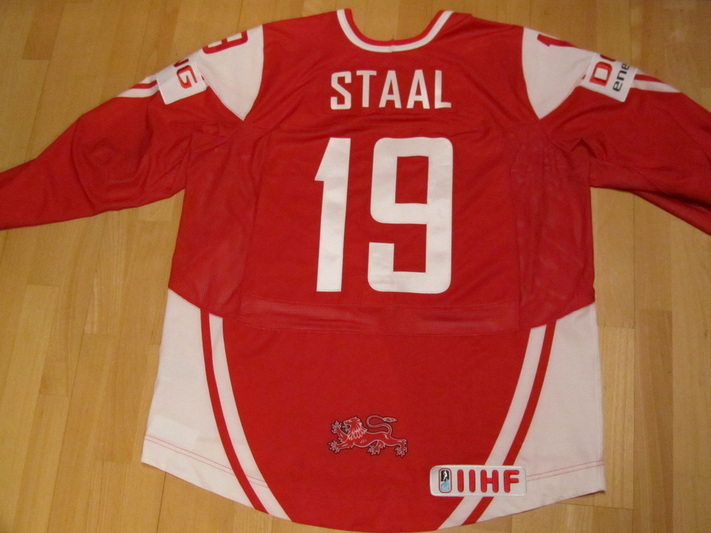 This team Denmark ice hockey national team jersey was worn by the legendary Danish forward Kim Staal in 2011 World Championship tournament in Slovakia. Staal scored 0 points in the tournament and his +/- rating ended up to -4. Despite it wasn't so good tournament for Denmark and Staal himself, he is one of the biggest stars in Danish hockey history. The 1978-born forward represented Danish senior national team for the first time already in 1996 Pool B WC. During the same season he scored 12 points in 4 games in U-20 Pool C WC.

In 2002 Pool B WC Staal played in 4 games scorin 4+1=5 points, including 2 goals in the promotion decicive game against Hungary. Staal scored the game winning 3-2 goal in the 2nd period. Denmark won the game 6-2 and earned promotion to 2003 World Championships in Finland.

Next year in 2003 WC Denmark shocked the hockey world in their first game in elite level since 1949. Back then Denmark lost to Canada in a very lopsided game 0-47 but now Denmark was of a different caliber. Denmark faced in their first game USA and to everyone's great surprise Denmark won 5-2 and Staal scored 2+2=4 points and became Denmark's hero when he secured that they would stay at the elite level.

That wasn't the only heroic action of Danish team in the tournament. They faced Canada in the qualification round and they managed to achieve a 2-2 tie game. Denmark lead the game till the end of 2nd period when Jay Bowmeester tied the game 1 minute remaining.

All numbers, the front and back crests and the IIHF patch are sewn. The jersey is made by Nike. 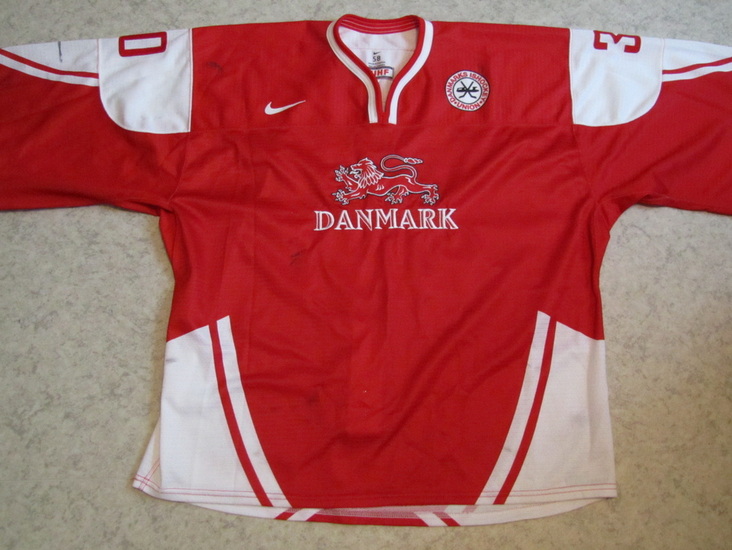 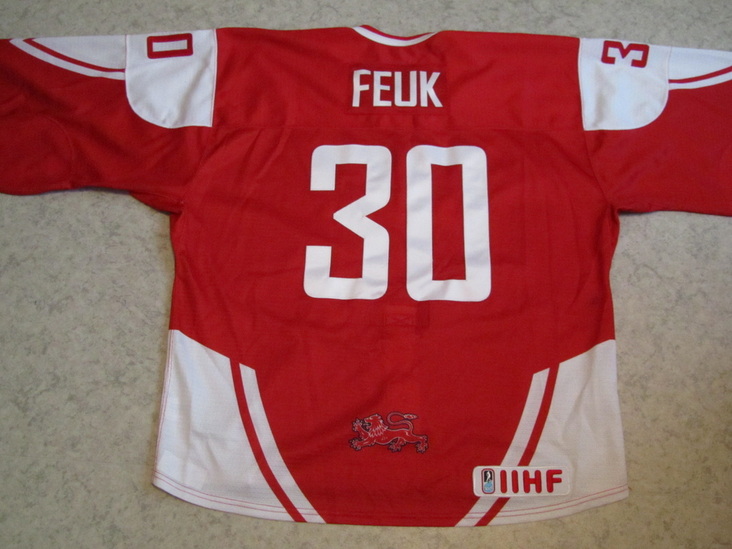 This team Denmark jersey was worn by goalkeeper Sebastian Feuk in 2012 WJC in Canada. Feuk played with the red jersey against USA (L 3-11),  Canada (L 2-10), and the relegation decicive game against Latvia which Denmark lost in the OT 1-2. Feuk played all 6 games in the tournament and his GAA was 7,15 and SVS% 83,9. There are plenty of huge puck marks all over the jersey on the front and the sleeves. I watched the games he played from live streams and I'm not surprised of the jersey's outfit.

All numbers, the front and back crests and the IIHF patch are sewn. The jersey is made by Nike.
Return to IIHF jerseys A-D