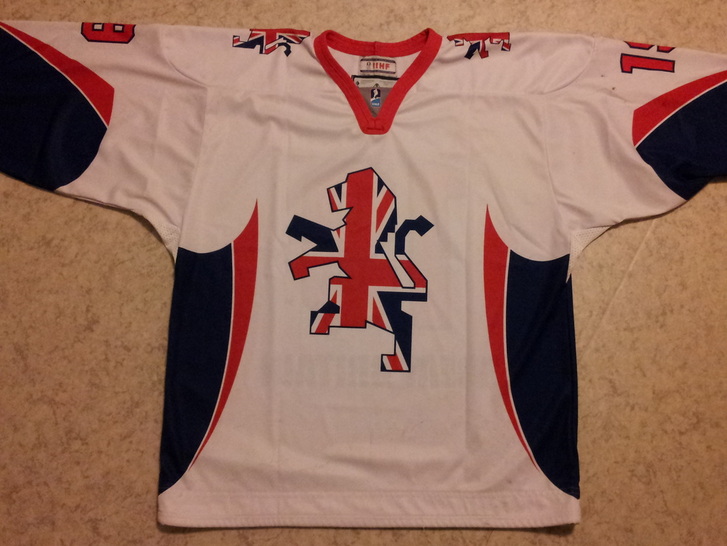 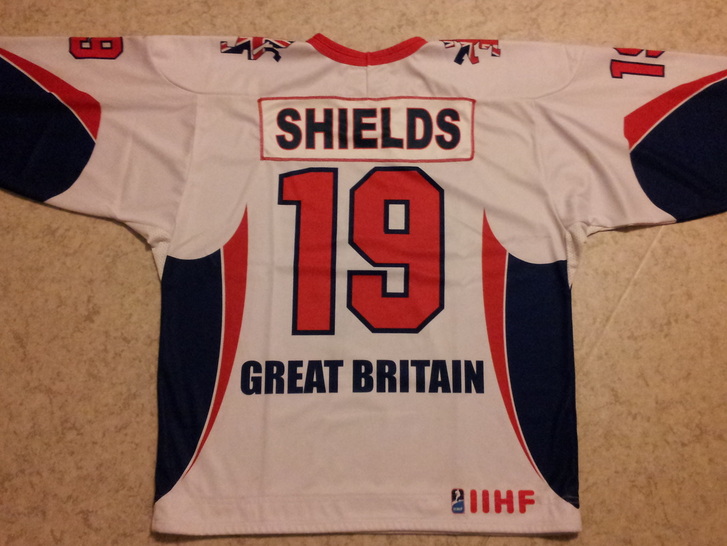 This British ice hockey national team game worn jersey was worn by Scottis-born forward Colin Shields in 2011 Div I WC in Kiev, Ukraine and 2012 Div I group A WC in Budapest, Hungary. He is Philadelphia Flyers' 6th round pick from 2000 draft but in North America he didn't play higher than ECHL.

In 2011 Shields couldn't play in the last 2 games GB played. He played 3 games and scored 1 goal and 3 points on those games. This jersey was worn against the host Ukraine (W 5-3) and Estonia (W 7-0). Shields scored the game winning 4th goal against Ukraine. The British were about 7 minutes away from promotion to 2012 World Championships. GB lost only to Kazakhstan 2-1 and were leading the round robin before the last game of the tournament, Ukraine-Kazakhstan.

If Ukraine had won the game at highest with 2 goal margin in regular time, GB would have promoted with better goal difference. Ukraine took 2-1 lead in the 3rd period but Kazakhstan tied the game when 7.38 was remaining. Kazakhstan won the game in overtime which game them the promotion. It would have been the first appeareance for GB at the top level since 1994 WC in Italy.

In 2012 tournament GB was instead of fighting for promotion fighting for not being relegated. Shields did his best for helping the team by being their 2nd best point scorer with 3 goals and 7 points. The jersey was worn against Slovenia (L 2-3), Japan (L 0-5) and Hungary (W 5-4). Shields scored 1+1 against Slovenia, 2+1 against Austria (L 3-7) and 0+1 against Ukraine (W 4-3 OT).

Before their last game against Hungary, GB was 1 point behind Ukraine and in serious threat to be relegated. Hungary had lost chances for promotion and loose attitude helped GB to give a serious fight against relegation. The tight game was decided by 3rd period penalty shot which gave GB 5-4 victory. GB survived and Ukraine was relegated.

The jersey has good overall wear with puck marks in the front, back and sleeves. The name plate is sewn, the letters on it are sublimated and all other crests, numbers and letters are also sublimated. The jersey is made by Tackla.

The jersey was obtained from Ice Hockey UK. 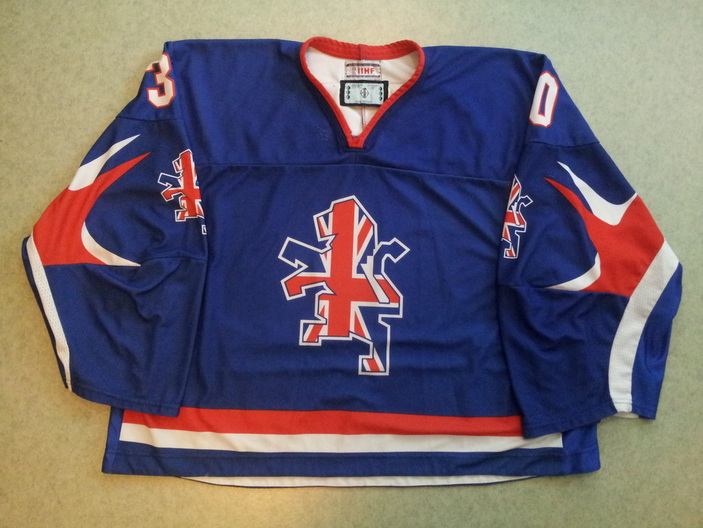 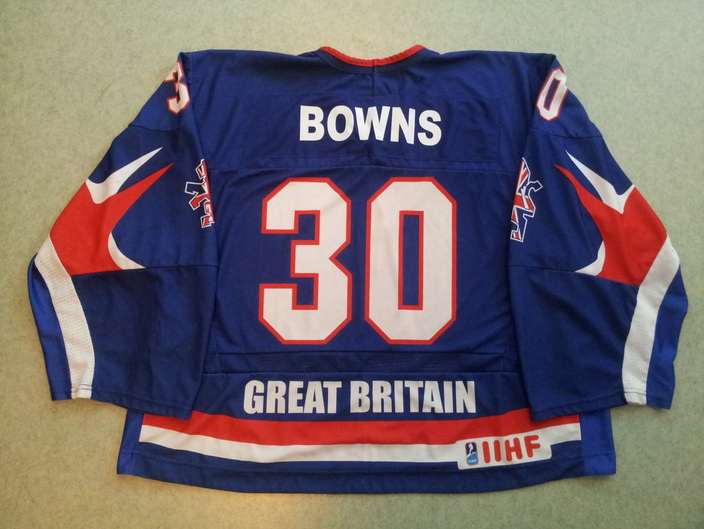 The 1991-born goalie was backup goalie for national team veteran Stephen Murphy in Budapest and Bowns played only 5 minutes in the tournament after he was substituted in for the last minutes against Italy.

Team GB used blue jerseys against Hungary (L 2-4), Kazakhstan (L 0-5) and South Korea (L 1-4). The Brits were struggling heavily in the scoring department in the tournament and the 1-4 loss to Koreans sealed GB's faith and relegation to Division 1B. Two years before Great Britain was almost promoted to top World Championships and this tournamet dropped them to 3rd level.

The team was one of the favourites to promote back to 1A in Lithunia in 2014. Great Britain played their first game against Croatia, which was reinforced with many Canadian-born players with Croatian heritage. The tournament started with a huge shock when team GB falled to Croatia 0-4 despite controlling shots on goal 33-18. Stephen Murphy started the game but was replaced with Bowns after allowing 4th goal in the sixth minute of the 3rd period.

The loss was a huge hit for their dreams of promotion and they were in front of must-win in their next game against Romania, the weakest team of the tournament on pre-estimations. Ben Bowns was the starter for GB in the game which they won 4-1. It was Bowns' first start in men's national team in the World Championships and he wore this jersey in the game.

Third game for team GB was another must-win against the host Lithuania which was reinforced with over 1200 NHL-game veteran Dainius Zubrus. The impact of Zubrus, who scored the game winning goal and the great saves made by the Lithuanian netminder Mantas Armalis was too much for Great Britain as the final score was 2-1 for the Lithuanians. GB outshot Lithuania 23-15 but scoring the needed goals was too overwhelming task.

That loss sealed the deal and GB lost chances to promotion.

In their final games they were able to beat The Netherlands 4-3 and in the last game GB won Poland 4-2, which had already secured promotion. That didn't help GB to get even a medal from the tournament. GB finished with 9 points, as did Lithuania and because Lithuania won the head-to-head game, Lithuania finished to 3rd and GB to 4th position.

Bowns was GB's starting goalie in all remaining games after Murphy was pulled off in the first game. Great Britain used the blue jerseys against Romania (W 4-1) and Poland (W 4-2).

Bowns allowed 8 goals in the tournament and his SVS% was 92,0. The jersey was some puck marks on the front and on the sleeves. What is noticeable, Bowns have removed or asked someone to remove for him the silver colored piece of fabric with the IIHF logo on the neck (look at Shields' jersey above for example). I assume he have felt the collar wasn't flexible enough so he wanted to take it off.

The nameplate is sewn with individual letters heat pressed onto it. All numbers, crests and patches are sublimated. There is a horizontal mesh stripe under the back number and there are mesh on the sides and on the underpart of the sleeves all the way to the cuff for better ventilation.

The jersey was obtained from Ice Hockey UK.
Return to IIHF jerseys E-H