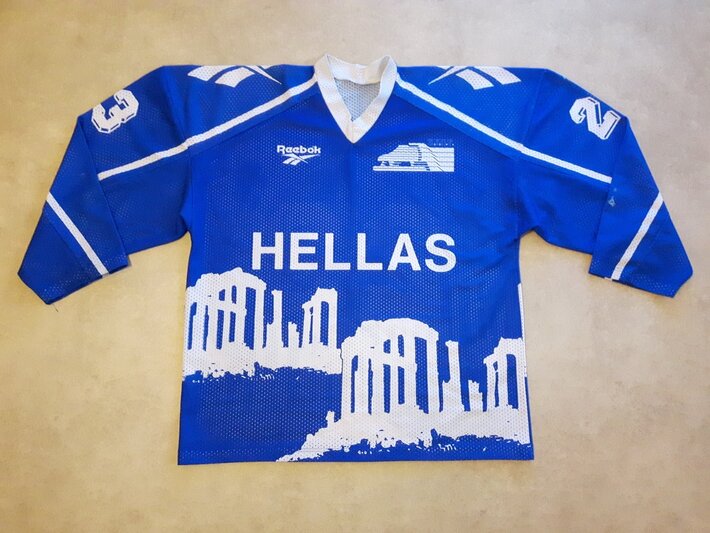 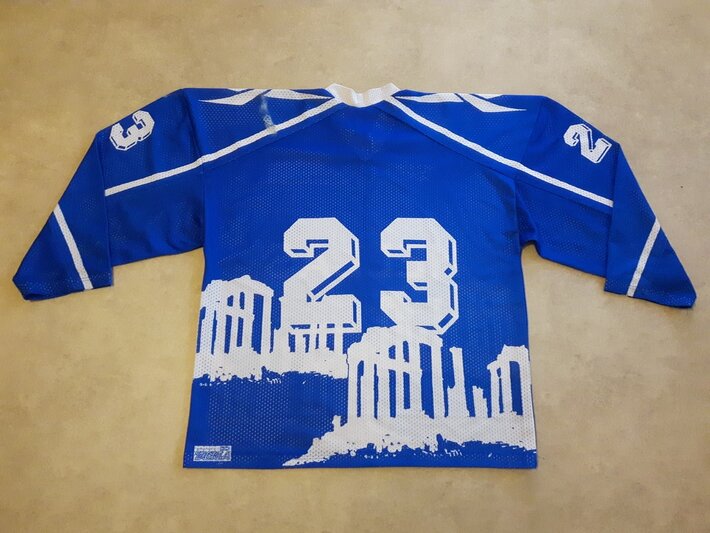 This one is perhaps the rarest jersey is my collection, 1994-95 season Pool C/2 World Championships team Greece Reebok game worn jersey. I have been informed that the jersey is the only one of its kind to end up into a private collector's hands.

Greece didn't do especially well in the tournament as they were last in their preliminary group after 1-20 loss to Lithuania, 1-21 loss to Spain and 2-10 loss to Australia. Greece gained a point after managing to tie 5-5 with Belgium. In a placement game against New Zealand Greece won the goal fest 10-7 thus avoided finishing dead last. The wear is pretty decent with few holes which tells the battle was fierce in the rink.

The Acropolis design is definitely the best ever seen on any national team and it truly gives justice and appreciation to the Greek culture. If I was allowed to keep only one jersey in my collection, it would hands down be this.

Currently team Greece is suspended from all IIHF events due to not fulfilling the minimum requirements of the IIHF. The biggest problem is that Greece doesn't have an international size rink, they don't have enough registered players nor a domestic league running. Things have turned into a better during the 2016-17 season as there are ice available in the capital city Athens and the domestic league has started after many years of absence. Perhaps Greece is soon able to participate again in the World Championships. Their last appeareance took place in the 2013 Division 3 World Championship tournament which was played in South Africa.
Return to IIHF jerseys E-H