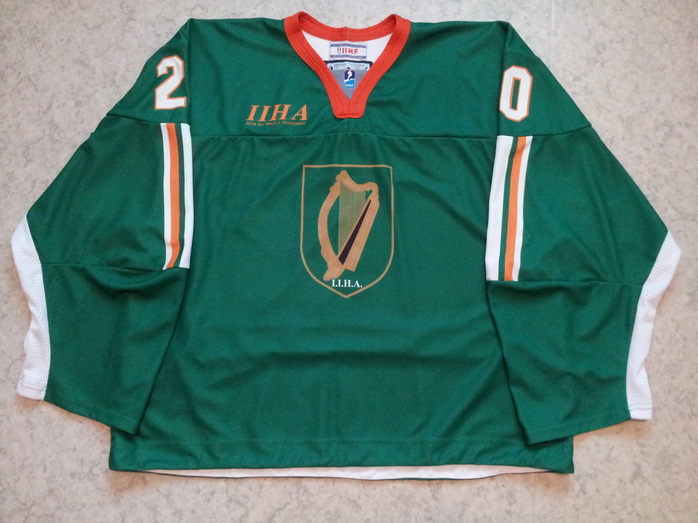 This green team Ireland ice hockey national team game worn jersey was used by goaltender Adam Pepper in 2013 Division III World Championships in Cape Town, South Africa. The jersey was worn during the last 5 minutes in game against Luxembourg (L 0-5) when Pepper was substituted in. He was a backup goalie using this jersey in games against Greece (W 6-3) and South Africa (L 4-7), thus it's bench worn from those games. Pepper was the starting goalie against UAE (W 7-3) and Ireland used white jerseys in that game. His SVS% from the tournament was 91,1.

The tournament was already 5th for Pepper in senior national team level.

The jersey was obtained from an Irish collector.

Currently Ireland is suspended from IIHF events due to not fulfilling the minimum requirements set by the IIHF. The ice rink of Dundalk has been shut down for several years and the ice rink operating in Dublin was open only few months after the opening before they also shut their doors. That's why they don't have a league running and that's why the Irish can't be seen at international stages for a while. This jersey was worn in the last tournament in which Ireland played. Even before that these jerseys were very tough to find. If the absent of the Irish national team from international games continues, these will soon become very rare collectibilites.
Return to IIHF jerseys I-L