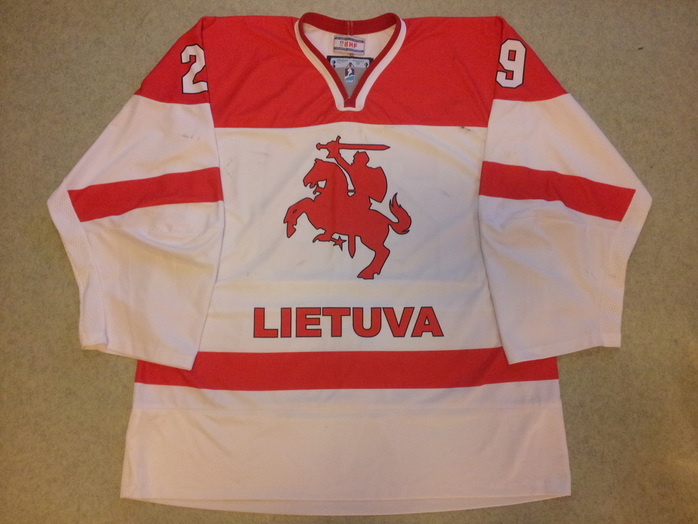 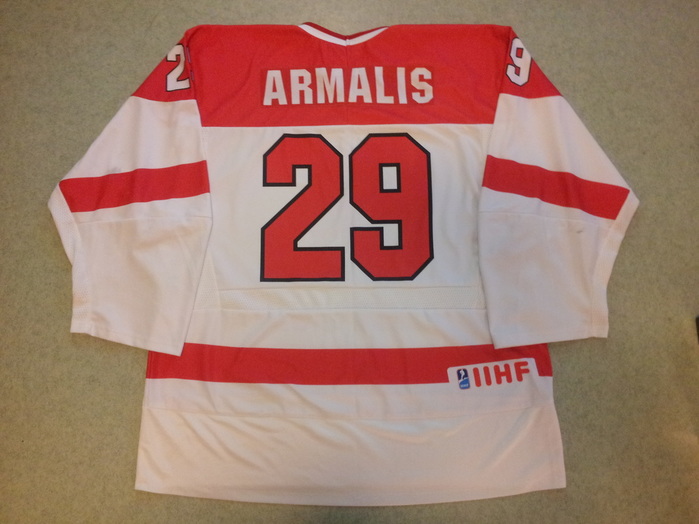 The white-red colored Lithuanian ice hockey national team game worn jersey above was used by the best goaltender the country might have ever produced, Mantas Armalis. The jersey was used in 2014 Division 1B World Championships in Vilnius, Lithuania in which Lithuania took bronze medals greatly thanks to the energy brought by NHL veteran Dainius Zubrus and the saves of Armalis.

This jersey was used only in the match agains Poland, which the Poles won 3-2. Lithuania played all other games with their red jerseys. The tournament was first for Lithuania with the red and white color scheme. Below you can find the previous green-red-yellow and white-green-red-yellow jerseys which replicate the colors of Lithuanian flag.

Armalis was born in 1992 and is 194 cm tall goalie and he has been playing in Sweden since 2007 when he joined one of the junior teams of the capital city Stockholm, Djurgården (which translates as 'zoo'). After only one season he moved 300 km northwest to town called Mora. There he played in U18 and U20 leagues and smelled the atmosphere of the men's Allsvenskan (2nd tier) as a backup goalie for few seasons before he got his first start in 2013-14 season. Before that he got experience on Swedish 3rd tier playing a whole season 2012-13 in Tranås AIF, the home of legendary Stiga table hockey and other Stiga products.

His first national team appeareance on Lithuanian jersey happened in 2009 U18 Division 1 WC where he was selected for the best goalkeeper of the tournament. Lithuania won only 1 game but still Armalis' SVS% was incredible 92,4 with the GAA 3.01. Armalis played all 5 games and he faced clearly most shots of all goalies in the tournament, 198 and he allowed 15 goals behind him.

His debute in men's national team happened in 2011 Division 1 World Championships. Armalis played in 4 games but the opposition was too strong and Lithuania finished 5th winning only Estonia in the tournament to avoid relegation. This time his SVS% wasn't very high, only 87,5.

After that tournament Armalis have been clear number 1 goalie for Lithuania and his career in Sweden have also started to flourish. After successful season in Allsvenskan with Mora, he returned 2014 to the club in which he first arrived in Sweden, Djurgården, which played and plays still in the top tier of Sweden, SHL (previously Elitserien). That was Armalis' first season in SHL and he played 20 games plus 5 games in Champions Hockey League and he will play in Djurgården in 2015-16 season.

Strong season in Sweden for Armalis was seen in 2015 Division 1 group B World Championships in Eindhoven, The Netherlands. He made tons of great saves to keep Lithuania in the game when the forwards had troubles to score goals. Armalis stopped Great Britain in the final game of those teams and Lithuania won the game 3-2. Great Britain needed only 1 point to earn promotion and Lithuania needed 3 points to get bronze medals, which they did. Armalis was selected for the best goalkeeper of the tournament and it went to absolutely right person.

The design is heavily simplified compared with the shapes the previous jersey had. The knight riding a horse is now presented as a silhouette rather than detailed drawing. There is no logo of the Lithuanian ice hockey federation but there's Lithuania written in Lithuanian language under the front crest.

A special detail on this jersey is that the hem is extended. There are signs of removed stiching as the folded hem has been opened and the extension piece have been attached to the hem. The material of the extension part is elastic fabric which is usually used in replica jerseys due to it's lightness and cheapness.

The jersey was used only in one game but the jersey has tremendous amount of puck marks all over it on the front, shoulders and sleeves. The nameplate is sewn with individual letters sublimated onto it. All other numbers and crests are sublimated. The jersey is made by Tackla.

It was obtained from Lithuanian ice hockey federation. 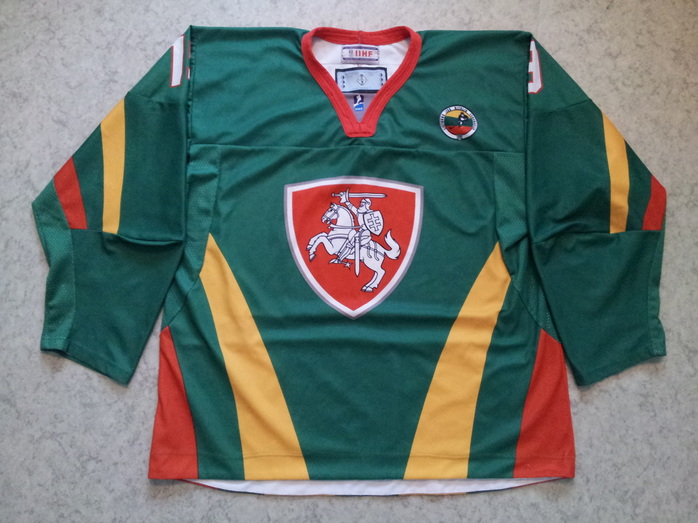 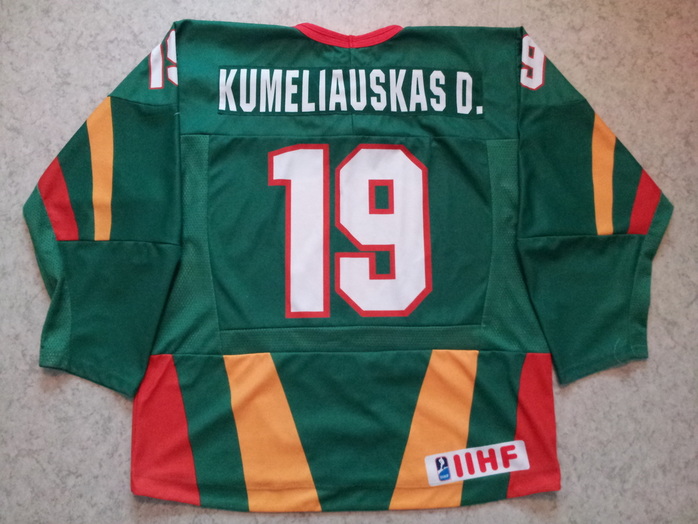 This very rare team Lithuania game worn ice hockey national team jersey was used by forward Donatas Kumeliauskas in 2011 Division I World Championships in Kyiv, Ukraine. Lithuania finished the tournament in 5th positions after winning Estonia 5-2 in their final game of the tournament.

Lithuania used the green jerseys against Poland (L 1-5) and Great Britain (L 2-5). Kumeliauskas scored 1 goal and 2 assists in the tournament: all of them against Estonia.

His brother Tadas plays in Finnish SM-liiga for TPS Turku.

This jersey was one of the most difficult jerseys to acquire. Despite it's located near Finland and it's pretty good ice hockey country, it was a great suprise to me to find out how hard was it to get any contact to the hockey people there. I've seen some older versions of Lithuanian national team jerseys for sale once in a while but I had never seen a game worn version of this modern beaty. It took many years until I got the chance to purchase it.

The jersey has some minor wear in the sleeves, mostly board burns, and there's one puck mark near the neck area. The numbers and crests are all sublimated on to the jersey. The nameplate is sewn with individual letters sublimated on to it. The jersey is made by Tackla.

It was obtained from private collector from Lithuania. 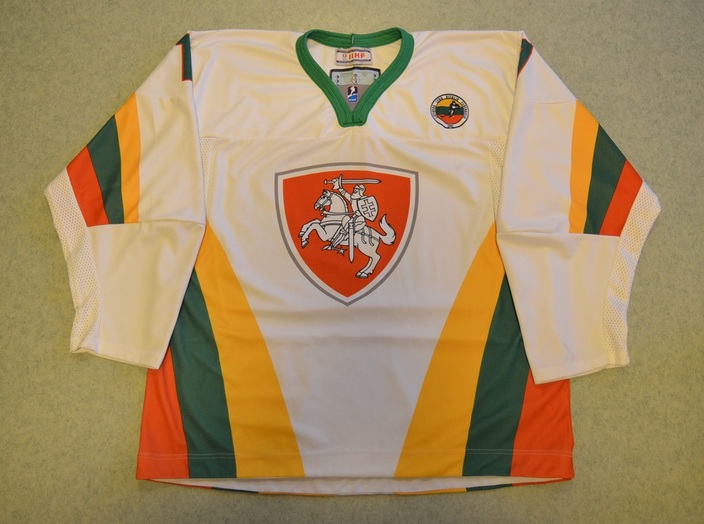 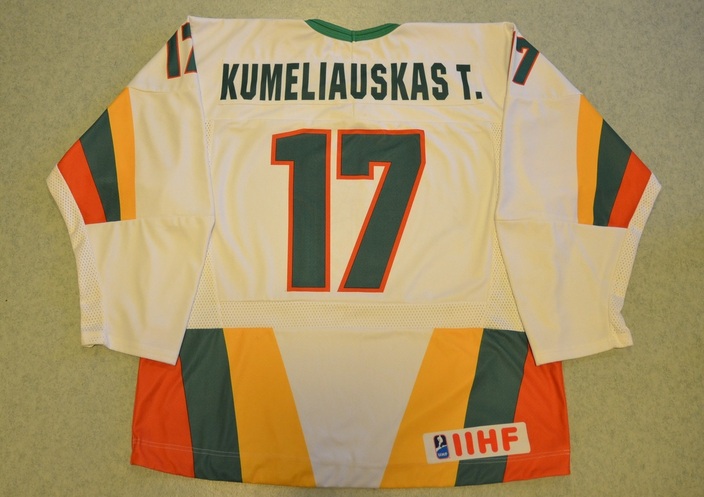 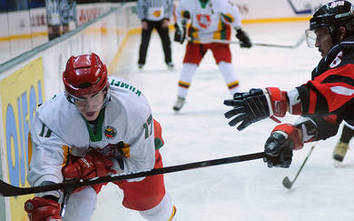 In 2010 Lithuania didn't do as well as playing in front of passionate home crowd. Lithuania won only newly-promoted Serbia and finished sencond-to-last, 5th. Lithuania used white jerseys in games against Ukraine (L 5-12), Austria (L 2-6), Serbia (W 10-4) and Japan (L 1-7). For Tadas himself, the tournament was much better than year before. He scored 5+4=9 points and took 33 penalty minutes. Tadas scored 2+2 against Serbia and scored the game winning goal and that victory saved Lithuania from relegation.

After the 2010 World Championships, Tadas got a contract to Kazakhstan league for a team called Arystan Temirtau. He played 3 seasons in Borat-league after he got a try-out to Finnish SM-liiga team TPS Turku. Former TPS-player Miika Elomo played also in Arystan in 2012-13 season and he suggested TPS to take Tadas to try-out. Elektrenai-born forward convinced coaches of TPS and he has played in southwest located team ever since.

As you probably noticed above, there is displayed Tadas' brother Donatas' national team jersey. This is my collection's first pair of brothers' jerseys.

There is light wear on the sleeves. The jersey was obtained from Lithuania.
Return to IIHF jerseys I-L