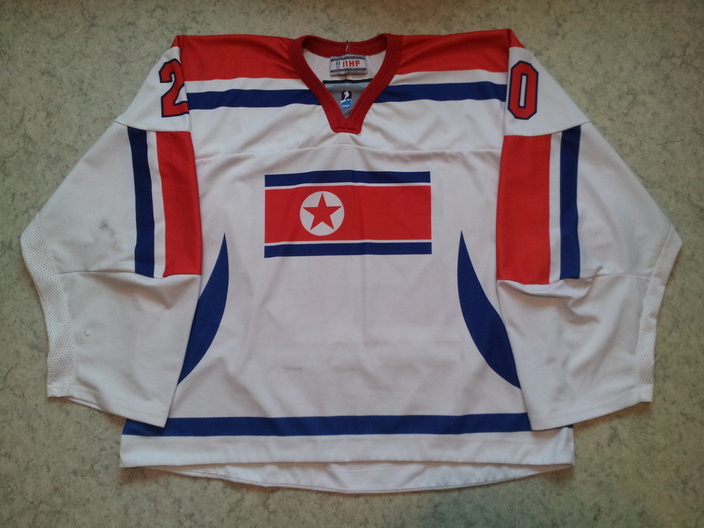 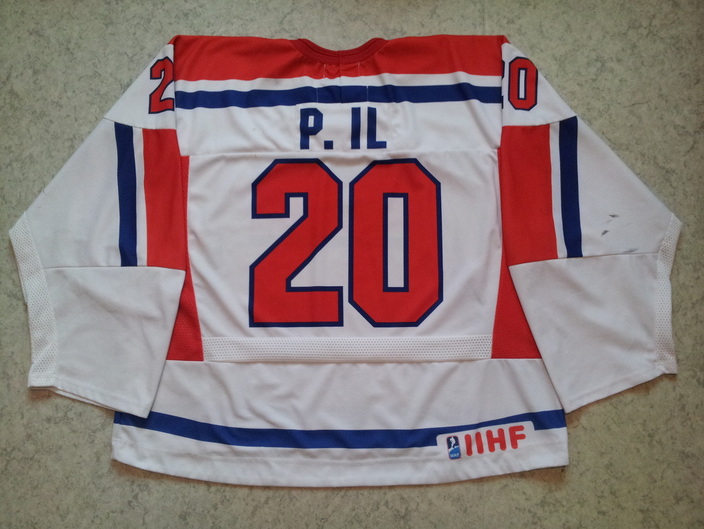 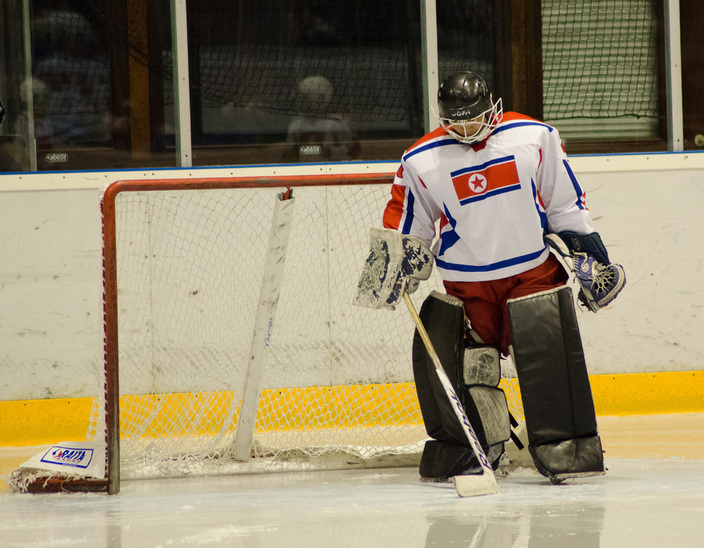 This unimaginably rare white North Korean national team game worn jersey was used by backup goaltender Il Pak during 2014 Division III World Championships in Luxembourg. It is photomatched to the photo above which I took in the tournament.

North Korea played all 5 games in the tournament using white jerseys. In their 1st game against World Championship debutant Georgia, Pak was changed in after first period when North Korea had outshot Georgia 30-0 and were leading 6-0. Il played the remaining 40 minutes and he faced only 4 shots on goal during the game and he gave up one goal on a breakaway. North Korea won the game 22-1 and outshot Georgia incredibly 92-4.

Next game for North Korea was against the host Luxembourg. North Korea dominated the game first two periods and were ahead 7-0. After the 2nd intermission, Pak replaced the starting goalie, another Pak, Kuk Chol Pak. It took only 5.17 minutes when North Korea changed again their goaltender. Il Pak allowed two goals on 5 shots and the coach used their timeout and  Kuk Chol Pak headed back to the net. North Korea won the game 7-3.

Third game for North Korea was against Hong Kong which made their only 2nd appeareance in the World Championships, the first being in 1987. Il Pak was the starting goalie and North Korea took a relatively easy win 12-2. Pak made only 9 saves in the game.

The final game which decided the tournament winner was North Korea-Bulgaria. Kuk Chol Pak played the whole game but there was very little he could do when the strong and skillful Bulgarian first line scored 4 unanswered goals and took 4-1 win. North Korea was without a doubt the best team in the tournament but Bulgaria's first line could make the difference. Also Bulgarian goalie legend Konstantin Mihaylov played the game of his life and made 48 saves while Kuk Chol Pak stopped only 20 pucks.

Il Pak allowed total 5 goals and made only 15 saves in the three games he played. His SVS% was only 75,0.

There are few interesting details in the jersey. One is that it's not from the 2013-14 set of jerseys. The red collar is the same style which was used at some national teams' jerseys in 2011-12, eg. Bulgaria. Second thing is that there are signs of removed logo over the North Korean flag. It's not visible in the photo but the stiching line has been 2-3 cm over the flag boarders. That means this jerseys has likely been used in North Korean league games because there are videos on Youtube from those games and some teams use national team jerseys onto which they have sewn a piece of fabric which has something written on it. Thirdly, the jersey have also had another nameplate on it.

The sign of removed nameplate suggests this might have been used in that tournament. There is an amateur video on Youtube in which you can see the jersey in action but it's not conclusive evidence. The location of the nameplate looks pretty similar than where the stitch marks are so it's possible.

What this does prove, is that North Korea does perhaps most effort on recycling their jerseys so it's very tough to find out all tournaments where some jerseys have been used. In Luxembourg some players had their name written on the nameplate with blue and some with red colour so that also tells you something.

The jersey is made by Tackla. The nameplate is sewn with individual letters sublimated onto it. All numbers and crests are sublimated. The jersey was obtained directly from the team after very long arrangements. 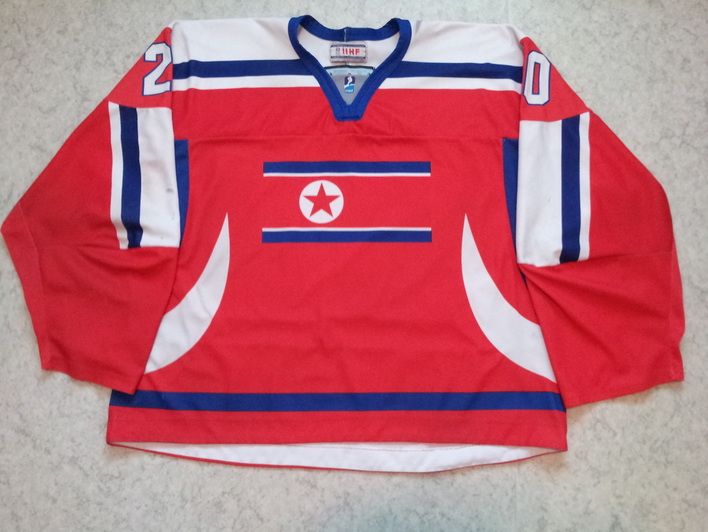 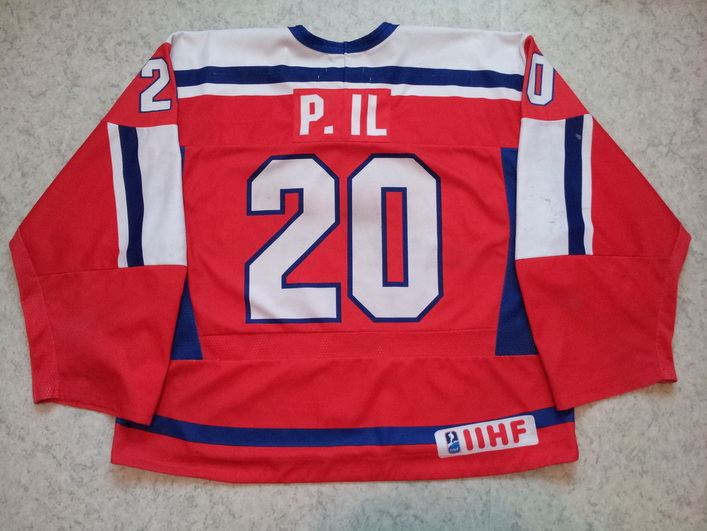 This is the red away North Korean game worn jersey of the same goaltender Il Pak from 2014 Division III World Championships whose white jersey I also own. This is only game issued for 2014 WC because North Korea played all games using white jerseys. Despite the jersey has plenty of puckmarks on it. The collar is different than on the other Pak's jersey meaning this is from the 2013-14 set of jerseys. It's possible that the jersey has been used during the team's practise sessions or in local games or practises.

Pak was not part of North Korean team in 2013 and neither of their goalies in that South African tournament used number 20. Instead the women's national team goalie used number 20 in their tournament in 2013 but it's not sure if this jersey was used in that tournament. There are clear signs of removed nameplate so it's possibly worn in the women's tournament. 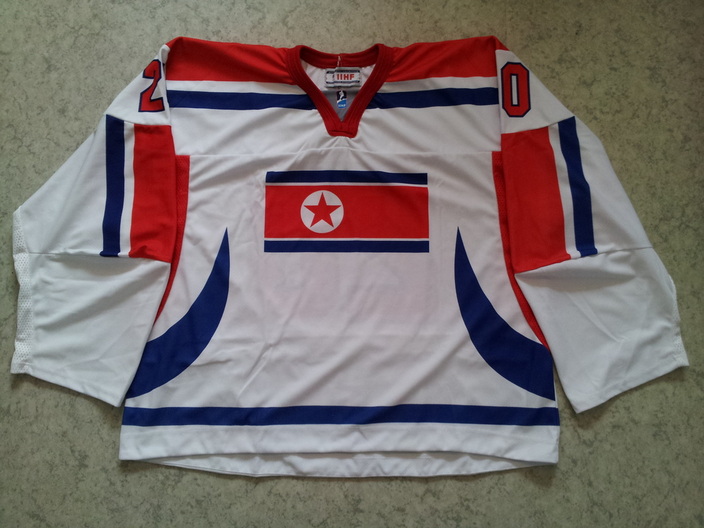 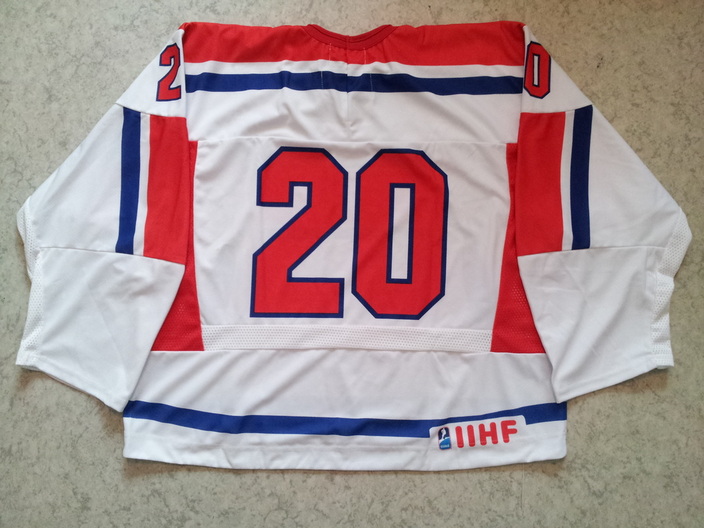 Yet another North Korean national team goalie jersey. What makes this very interesting is that it's from 2011-12 set of jerseys and it's almost completely untouchable. There are not a single stain or puckmark on it but there are signs of removed nameplate. Despite that it smelled pretty stale when I received it from the North Korean player. It was in an equipment bag in which they had also game worn jerseys and they smelled absolutely horrible. They had probably been there for years without being washed or stored in fresh air.

I don't know which one is rarer: a game worn or completely new team issued North Korean jersey.
Return to IIHF jerseys M-R