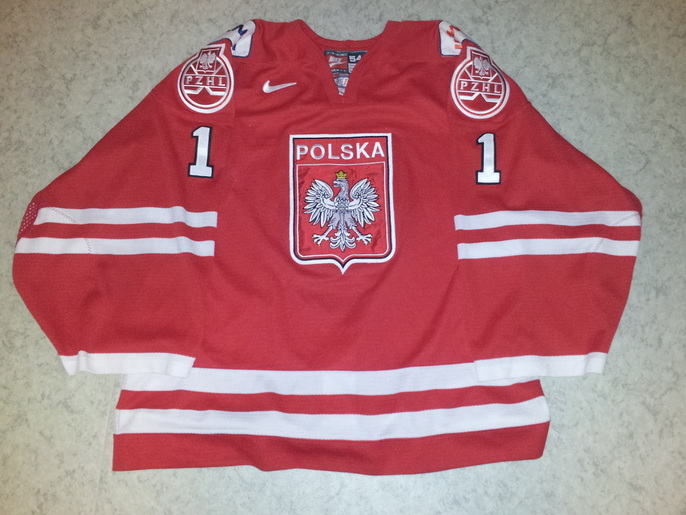 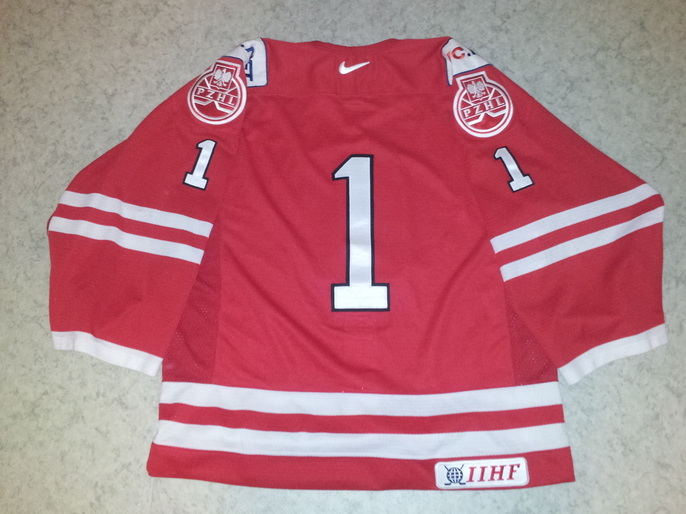 This extremely rare and beatiful team Poland game worn jersey was used by goaltender Tomasz Wawrzkiewicz in 2002 World Championships in Sweden. He played only 1 game in the tournament, against Finland in 0-8 defeat. I am confident that Wawrzkiewicz wore this jersey in that game.

The tournament was one of the very few visits for Poland in the elite World Championships in the modern days. Before the 2002 tournament Poland could've been seen in the 1992 IHWC in Czechoslovakia. Poland showed up to the 2002 tournament reinforced with their NHL-stars Krzysztof Oliwa and Mariusz Czerkawski.

They couldn't help Poland with the scoring department in the preliminary round. Poland lost to Slovakia 0-7, 0-3 to Ukraine and collapsed 0-8 to Finland. Their goal difference was 0-18 and their tournament would continue in the relegation group among with Slovenia, Japan and Italy.

Poland won Italy 5-1 but lost to Slovenia 2-5. Poland's last game was against Japan which Poland won 5-2. Poland finished the group 2nd but Asia had  reserved place in the World Championships in that time. Team Poland's fate was thus to get relegated despite they would have earned to stay in the elite group by the standings.

The jersey has puckmarks on the front and on the sleeves. There is also one 2 cm long team repair on the left side of the front crest. All numbering, crests and sponsorship patches are sewn. The jersey has also fight strap. The jersey is made by Nike.
Return to IIHF jerseys M-R