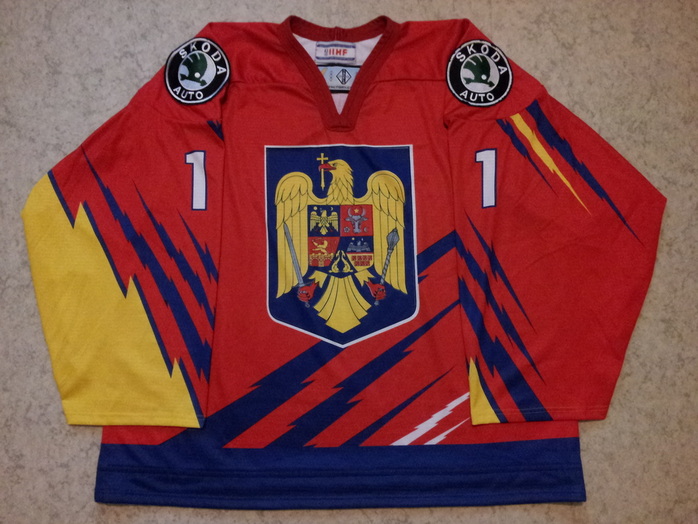 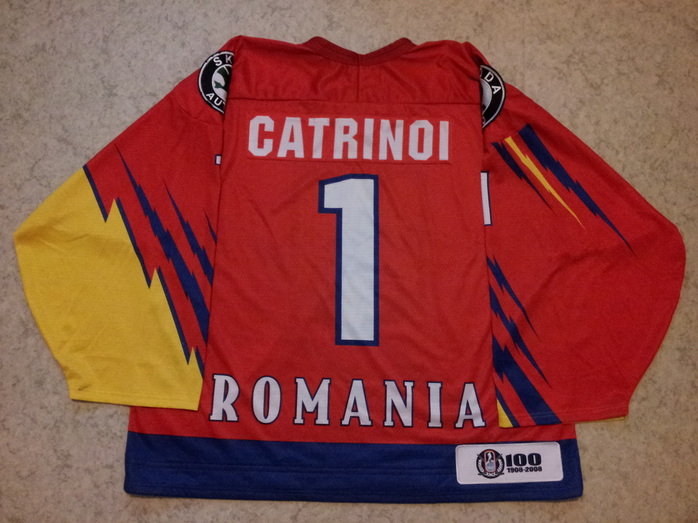 This rare Romanian national team jersey was used by goalie Adrian Catrinoi in 2008 Division 2 World Championships held in Miercurea Ciuc, Romania. Catrinoi played two games in the tournament in which he used yellow jersey. Thus this jersey is bench worn.

Romania was completely overwhelming in the tournament. They won all 5 games with goal difference 65-2. Catrinoi allowed only 1 goal as did the other goalie Szabolcs Molnar. The biggest win for Romania was their 21-1 humiliation over Ireland. Romania's final game against Belgium ended 5-1 for the hosts and Romania earned promotion to 2009 Division 1 World Championships.

1979-born Catrinoi has been Romania's #1 goalie since 2010 Division 2 World Championships. His efforts weren't enough to help Romania beat huge favourite Estonia in 2010. One year later in 2011 he was the team's biggest celebrated hero when he silenced Croatian home crowd with his superb saves when they won Croatia 2-1 and earned promotion to newly established Division 1B which would be the 3rd level of World Championships. In 2012 and 2013 Romania was more or less close to relegation to Division 2A but in 2014 Romania suffered from lack of talent in the team and Catrinoi did all he could but Romania was doomed to relegation to 2015 Division 2A WC which will be held in Iceland. 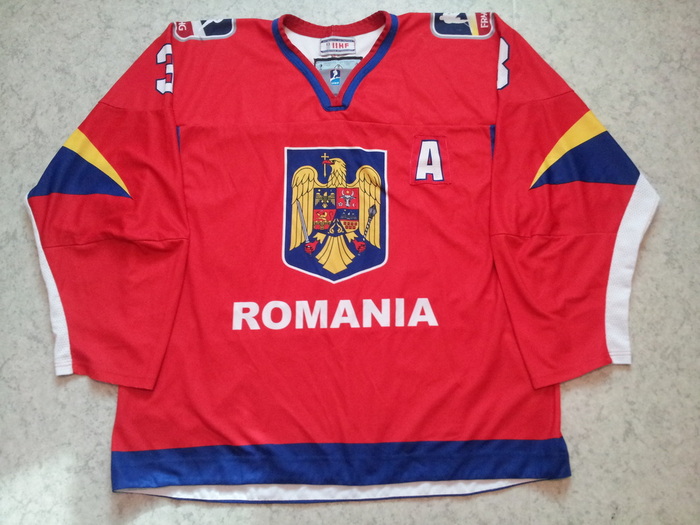 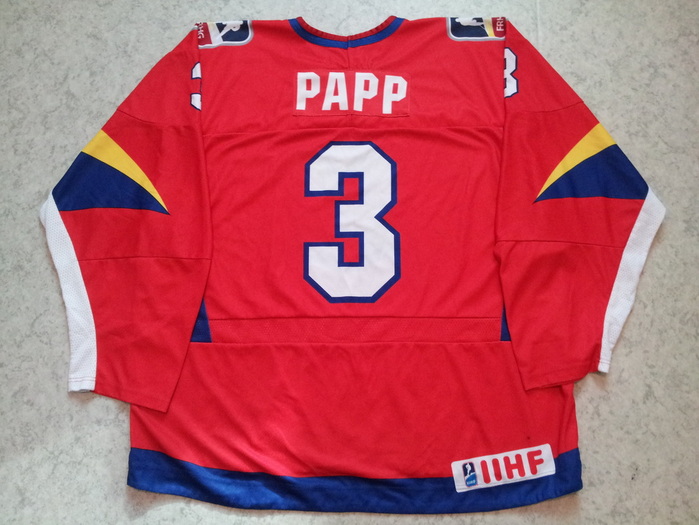 This beatiful and very rare team Romania game worn jersey was used by two different senior national team players in 2011 Division 2 World Championships in Zagreb, Croatia and in 2012 Division 1 group B World Championships in Krynica, Poland. The modern Romanian senior national team jerseys are very difficult to find because the players and federation are tough to contact. It took some time for me to receive this one.

In 2011 the jersey was used by defenceman Attila Góga. Romania played their last two games against Bulgaria and Croatia wearing red jerseys. Romania won Bulgaria 10-1 and the final game against Croatia would decide if they or Croatia will promote to Division 1 group B. Croatia was favourite to win the game and the tournament in front of their home fans and they took the 1-0 lead in the 1st period. Romania tied the game in the 2nd period and to Croatians' big shock took the lead in the 3rd. Croatia gave all they had to tie the game but Romania won the game 2-1 and gained promotion to upper division.

Góga was on the ice during all the goals scored in the game but didn't score any points. His totals from the tournament was 2 goals, 6 points and +6 in +/- rating.

In 2012 the nameplate was switched to match it with long serving defenceman Szabolcs Papp. After promotion to upper division, the Romanians were focusing on staying on their new division. They would face Poland, South Korea, Lithuania, Australia and the Netherlands in this forehand rather tight group. Romania used the red jerseys in games against the Netherlands (L 1-4), South Korea (L 1-6), Lithuania (W 6-5) and Australia (W 5-3). They used white jerseys only in 0-10 loss against Poland. Thanks to wins against Lithuania and Australia, Romania finished the tournament in 4th place.

Papp has been an experienced leader for many years in Romanian national team. In 2010, 2012 and 2013 has been their alternate captain and in 2011 he was the team's captain. He showed his leadership against Lithuania when he assisted Romania's tying goal 3-3 in the 2nd period and when his team was trailing by 4-5 in the late 3rd period, he was on the ice when Romania scored two more goals. Those goals helped Romania to win the game 6-5 despite they were trailing 3-5 with less than 4 minutes left in the clock.

The assist was his only point he gained in the tournamen and his +/- rating was 0, as was his number of penalties taken.

The jersey has some very good wear on it. There are many puck marks in the left shoulder, some board burns in the right shoulder and few huge puck marks on the right side of the back number. All crests and numberings are sublimated. The alternative captain's 'A' and the nameplate are sewn with individual letters sublimated onto them. The underarm parts are mesh and there is a horizontal mesh stripe under the back number. The jersey is made by Tackla.
Return to IIHF jerseys M-R