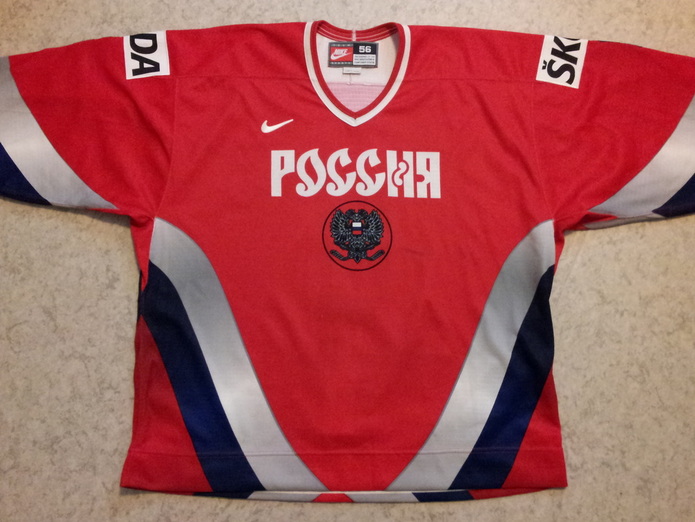 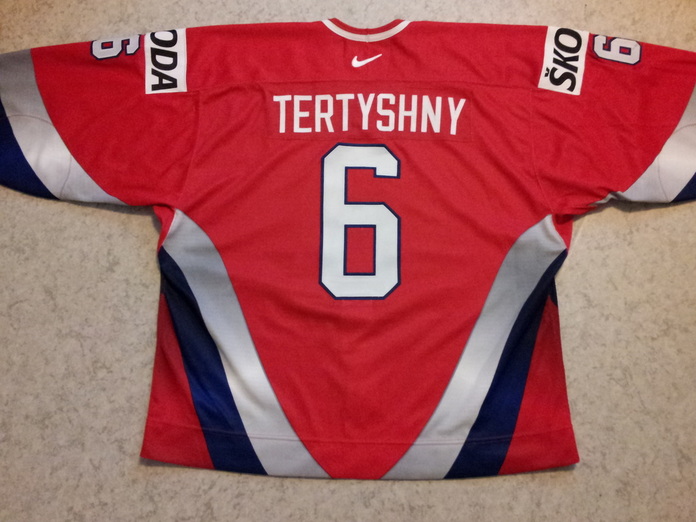 This Russian national team jersey was worn by defenceman Sergei Tertyshny in 1999 World Championships in Norway. He played 6 games scoring 1 goal and 2 points. Russian team was starred by legends such like Alexei Yashin and Andrei Markov. Especially one forward was very well known for Finnish hockey fans from Finnish Elite League: Alexander Barkov.

He's Washington Capitals' 11th round draft pick from 1994. He never played in the NHL but he played 2 seasons in Portland Pirates in AHL. Besides of those seasons in North America, he played his whole career in Russia.

I'm not sure if the teams received another set of jerseys after the preliminary round because at least Russia didn't have sponsorship patches on the sleeves in those games. If Russia really used these same jerseys during the whole tournament, it's part of very epic Finnish hockey history.
Finland recieves a power play one minute remaining in the game. Tertyshny is on ice during the whole PP. You can see him standing in front of the left post when Finland scored the tying goal. I remember watching this game live from TV when I was a kid and I would have never believed to own later a jersey which was used during that particular goal.

Russia finished the tournament in places 5-8 as they couldn't get into the play-offs after the qualifying round finishing 3rd behind Czech Republic and Sweden. Only two teams from two qualifying groups got into the semifinals.

The numbers, sponsor patches and name plate are sewn. The front crest and ROSSIJA are screened on. The flag pattern is sublimated. The jersey is made by Nike.
Return to IIHF jerseys M-R