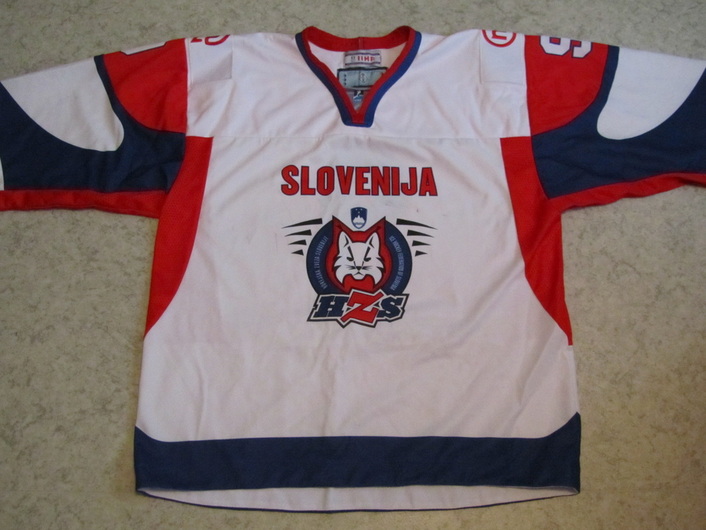 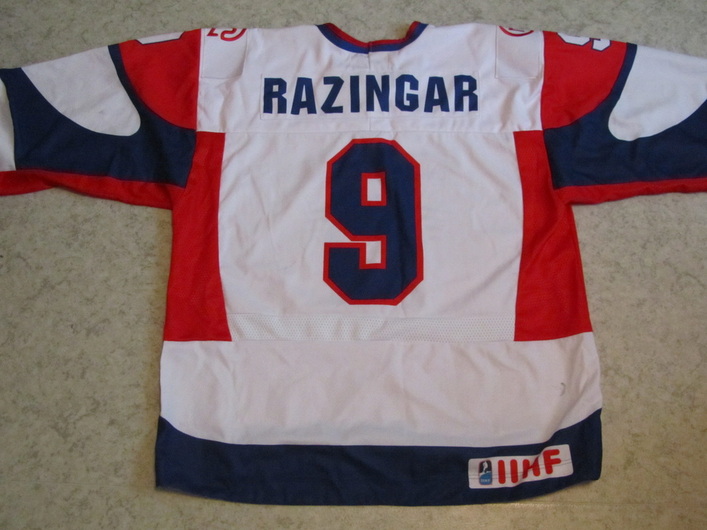 This Slovenian game worn jersey has been worn by legendary forward Tomaz Razingar in 2009 and 2010 Division I World Championships in Vilnius, Lithuania and Ljubljana, Slovenia.

In 2009 Slovenia was one victory away from earning promotion to 2010 World Championships but they lost their final game against Kazakhstan 1-2. Razingar was Slovenia's best point scorer with 4 goals and 8 points. Slovenia used the white jerseys in games against Japan (W 2-1) and Kazakhstan.

In 2010 Slovenia had done their homework and didn't let the home crowd down. Razingar's personal effort was also very satisfying. He scored 3 goals and 4 points. Slovenia won all 5 games but Great Britain forced the hosts to OT. Despite losing 1 point, Slovenia was promoted to 2011 World Championships. Slovenia used the white jerseys only against Poland (W 3-2). Razingar scored 1 goal in the game.

Razingar was also the captain for Slovenia in both tournaments but the 'C' has been removed by the team.

The 1979-born forward represented the Slovenian national team 1st time already in 1994-95 season in U-20 Pool C World Championships and has been the regular reinforcement of the national team ever since.

The name plate and sponsorship patches are sewn, all numbers, crests and the IIHF patch are sublimated. The arm part is ergonomically designed which is different than normal Tackla design. There are also mesh in the armpit area and one horizontal mesh line under the number in the back. 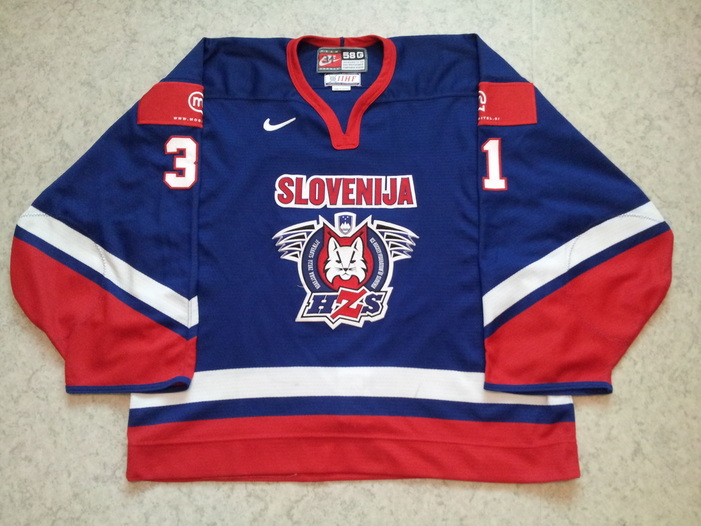 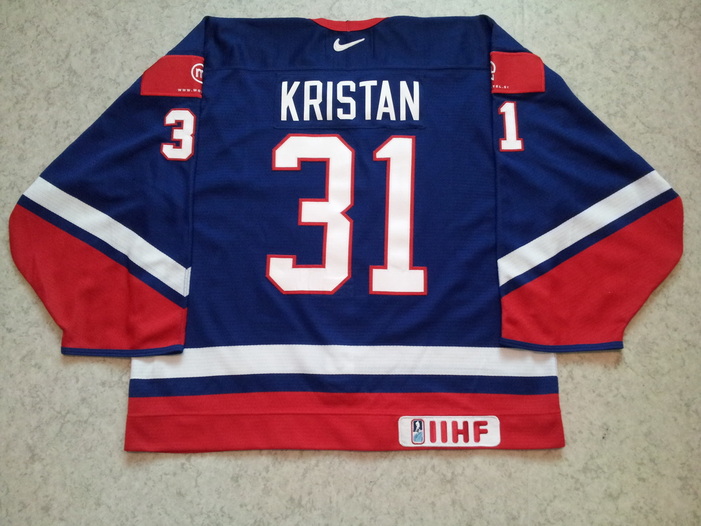 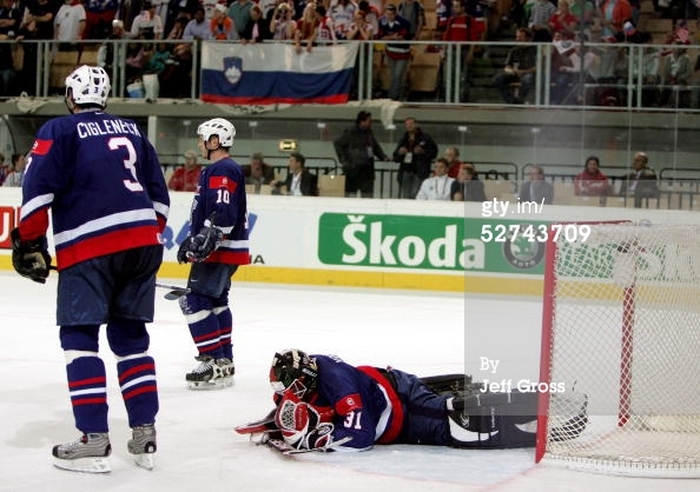 This beautiful and rare Slovenian national team game worn jersey has been used by their current number 1 goalie Robert Kristan in 2005 World Championships in Austria. Kristan played only one game in the tournament and he wore this jersey in their 0-7 deficit to USA in the preliminary round. Kristan made 31/38 saves. The jersey is photo referenced to the game photo above from the game against USA.

Slovenia lost their remaining two games in the preliminary round to Canada and Latvia and their tournament would continue in the relegation round against Germany, Austria and Denmark.

After winning Denmark 4-3 and losing very lopsided to Germany 1-9, Slovenia's fate was determined in their last game against the host country Austria. Austria couldn't handle the home pressure and Slovenia won the game clearly 6-2 and was able to avoid the relegation with Denmark.

The 1983-born goalie has been one of the key members of Slovenian national team for long. In 1999 he represented Slovenia in U18 Division I European Championships and his first appeareance in senior level was in 2002 World Championships in Sweden. Then he didn't play any games but he played one game in 2003 World Championships in Finland, relegation round game against USA which Slovenia lost 2-7.

Kristan have played in Slovenian, Swedish and Austrian leagues and in 2013-14 he plays for HK Nitra in Slovakian league. Between 2009-2013 Kristan represented the glory and pride of Croatian ice hockey, KHL Medvescak Zagreb.

The wear on the jersey consists of small puck marks in the front. The front crests, Nike logos in the front and the back, Mobitel sponsorship patches, all numbers, nameplate and the IIHF patch are sewn onto the jersey. The individual letters on the nameplate are heat pressed onto it. The jersey is made by Nike. 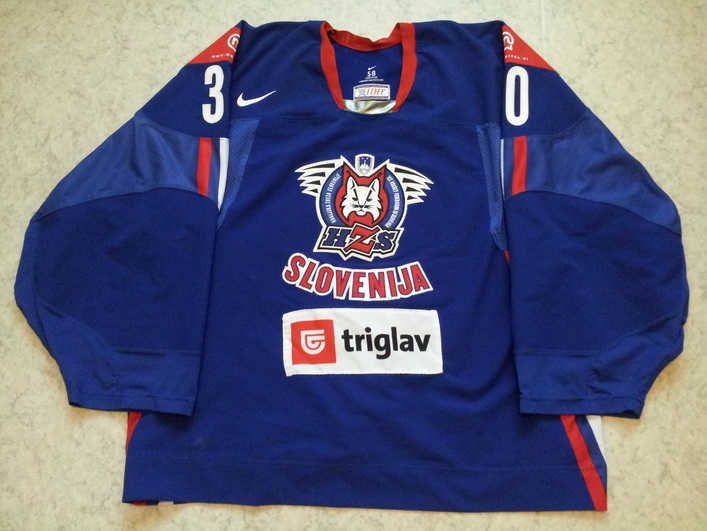 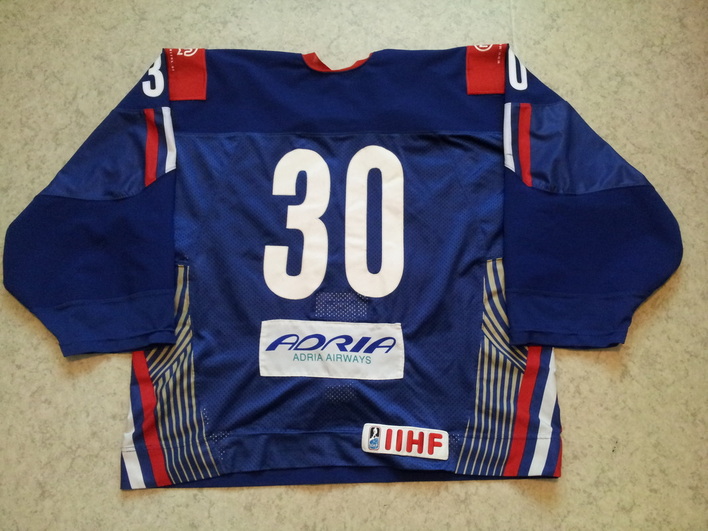 This Slovenian goalie jersey was mentioned to be a game issued jersey but there are quite many puck marks on it, also on the front side sponsorship patch. The red sleeve sponsor patch and curving SLOVENIJA logo in the front refers to 2006 World Championships so it dates to exhibition games prior to the tournament. The goalie jerseys of U20 national team of the USA were exactly like this one. In 2006 World Championships number 30 was used by goalie Gaber Glavic. This has likely been a back up jersey in that tournament.

The jersey is quite heavy from the front and the sleeves but the back side is completely mesh. The front crest, SLOVENIJA, all numbers, IIHF patch and the sponsor patches are sewn. There are no signs of name plate. The jersey is made by Nike.
Return to IIHF jerseys S-Y