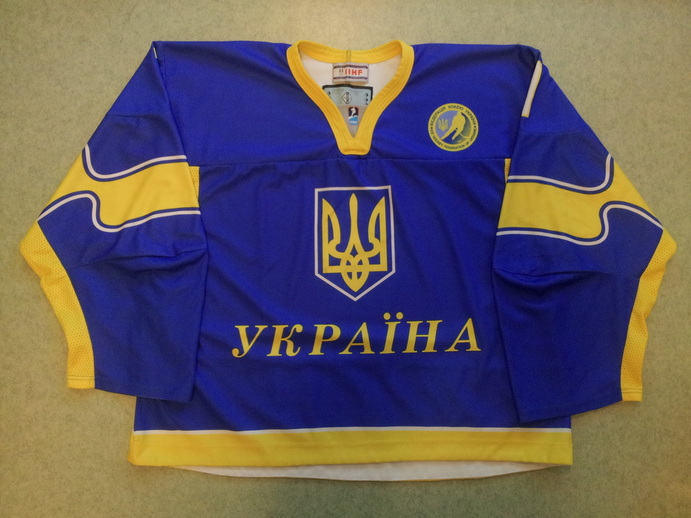 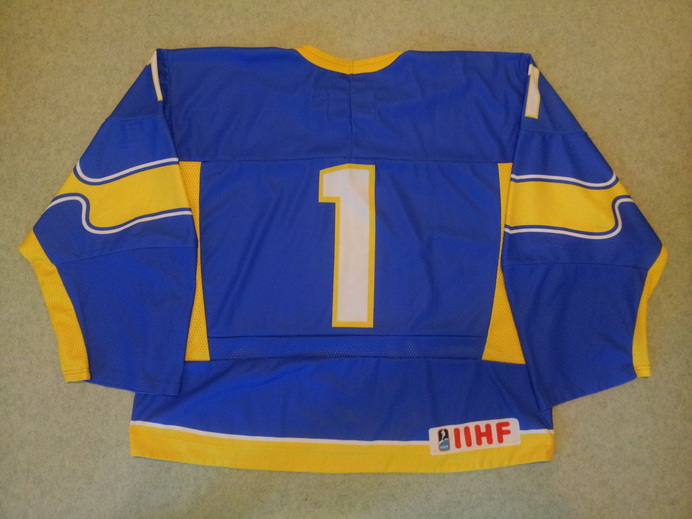 This one's a Ukraine national team game worn jersey from 2009 and 2010 Division 1 World Championships in Torun, Poland and Tilburg, The Netherlands. It had different users on both tournaments. In 2009 the user was goalie Igor Karpenko and year later it was used by another long-time Ukraine national team goalie Konstantin Simchuk. In 2009 Simchuk used #29 and switched to #1 for 2010 when Karpenko wasn't in the team in Tilburg.

In 2009 tournament Karpenko played two games, The Netherlands (W 5-1) and Romania (W 7-0) and Ukraine used blue jerseys in both matches. Ukraine played also their tournament opener against Great Britain in blue jerseys (W 4-2) and Karpenko was backup goalie in that match. Ukraine had lost only 1 point before their last game against Italy which hadn't lost a single point by that. The winner would promote to 2010 World Championships and Ukraine lost by 0-2. The Italians took 57 penalty minutes in the game and Ukraine dominated shots on goal very clearly 37-19 but Thomas Tragust in Italian net was unbeatable. At 58.19 Italy gave the final chance for Ukraine to tie the game on power play but only 17 seconds later Italy sealed the deal with an empty netter.

Karpenko is Mighty Ducks of Anaheim's 8th round draft pick in 1995. Before the entry draft he represented Ukraine in Pool C World Championships first time in his career. Karpenko played in different leagues in North America between 1996-1999 before he signed with Metallurg Magnitogorsk in Russian league 1999. He represented Ukraine in 2002 Olympic games in Salt Lake City and he played in 2 games with SV% 86,5. Ukraine finished the tournament 10th after losing position game against Latvia 2-9. Karpenko allowed 3 goals in the first 5.20 of the tournament and he was replaced by Simchuk.

In 2010 Ukraine used blue jerseys in their two first games against Lithuania and The Netherlands. Simchuk was backup goalie in Lithuanian game (W 12-5) but he was substituted in after 2nd period. Ukraine had 5-1 lead but they headed to 2nd intermission in a score 6-4. Simchuk was starter when they smashed the hosts 9-2 and would play the remaining 3 games in which they used yellow jerseys.

Ukraine won all their games before the last game against also unbeated Austria, which would decide the promoting team for 2011 World Championships. Ukraine lost the game 1-2 despite outshooting Austria 28-22 and recieving a 5 minute powerplay 8 minutes remaining in the 3rd period.

As mentioned earlier, Simchuk was also part of team Ukraine in 2002 Olympics where he played shutout when Ukraine worn Belarus 1-0. Simchuk ended his national team career after 2011 Division 1 World Championships and playing career in 2013.

The jersey has many puck marks all over the jersey. It's made by Tackla. The jersey was obtained from Ukrainian collector.