About me and ice hockey 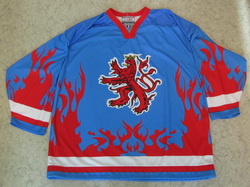 Welcome to my website. I'm a Finnish hockey fan who travels annually to lower division World Championships and I also collect game worn national team hockey jerseys. I made my first hockey trips in February 2009 to Oslo, Norway and and later in April to Dunedin, New Zealand. In Norway I witnessed the final stage of 2010 Vancouver Winter Games ice hockey qualification tournament and the host Norway won the group and spot to the Olympics. The other teams were Denmark, Kazakhstan and France.

Teams in New Zealand were not the most famous hockey national teams or how does a pool consisting of  New Zealand, Ireland, Greece, Turkey, Luxembourg and Mongolia sound. I was very disappointed when the Mongolian team didn't arrive. I heard that the players were not given the visas to enter the country.

The tournament in New Zealand, and especially team Luxembourg, made me interested in the national team jerseys. The awesome flame pattern circling around the jersey and the sleeves and the huge lion crest made that in my opinion the most beautiful national team jersey in the world.

It took me 3 years after starting jersey collecting to finally get the jersey which made me start this project. It's the jersey in the left upper corner.

My mission is to collect a game worn (preferably goalie) jersey of every (preferably) senior national team playing in IIHF World Championships. At the moment my priorities are in the lower division teams but I will also consider the elite WC teams if I find some interesting jerseys. At the moment there are 60 different national teams in my collection.

You will find the jerseys by clicking the different "IIHF jerseys" tabs.

If you could help me finding the missing jerseys, please don't hesitate to contact me. If you are interested in buying or trading jersey(s), you can find the available jerseys under the "For sale" tab. When it comes to trades, I am looking for national teams I don't already have, or you have an interesting jersey of a team I already have.

Currently I have one jersey for sale.

If you have any comments, please send me a message. (Your email address won't under any circumstances be distributed to any 3rd parties)