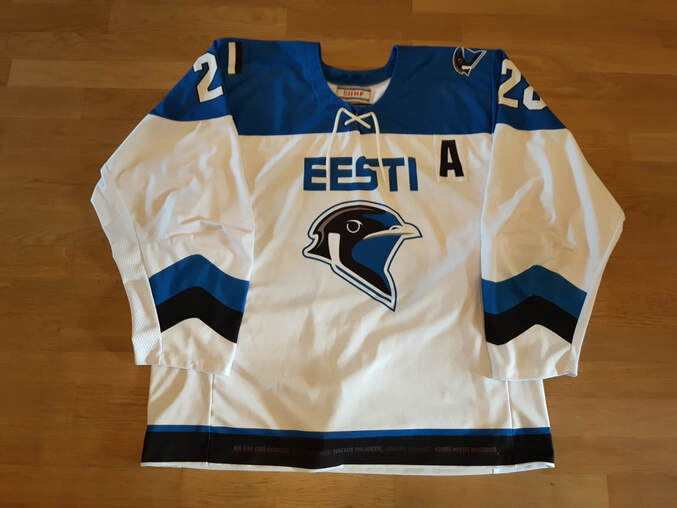 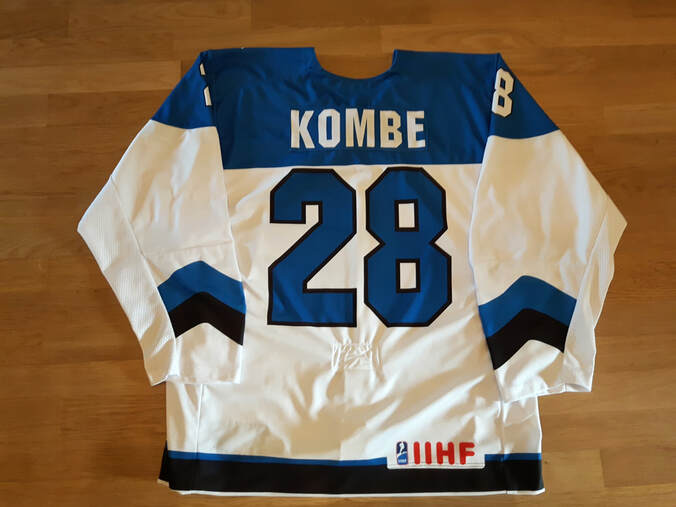 This Estonian national team game worn jersey was used by one of the future stars of Estonian hockey, Kristjan Kombe in 2020 U20 Division 1B World championships in Kiev, Ukraine. Estonia avoided relegation thanks to their last minute game winning goal against Italy.

This jersey was used in their last match of the tournament against Ukraine which Estonia lost 3-7. Kombe scored 0+2=2 in that match and total 2+2=4 in the tournament. 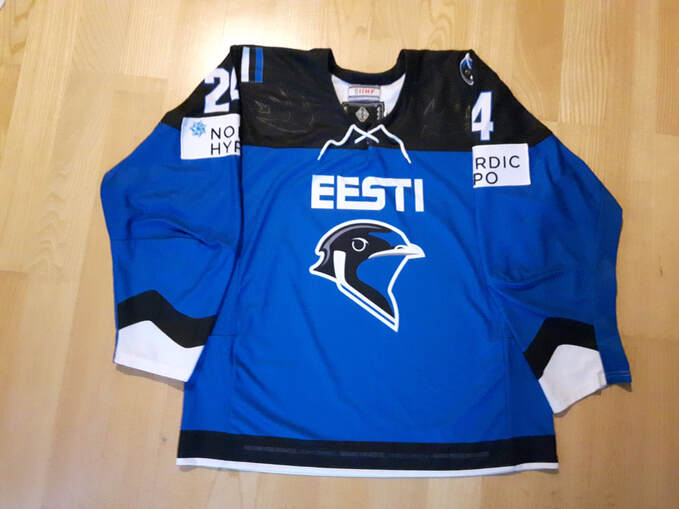 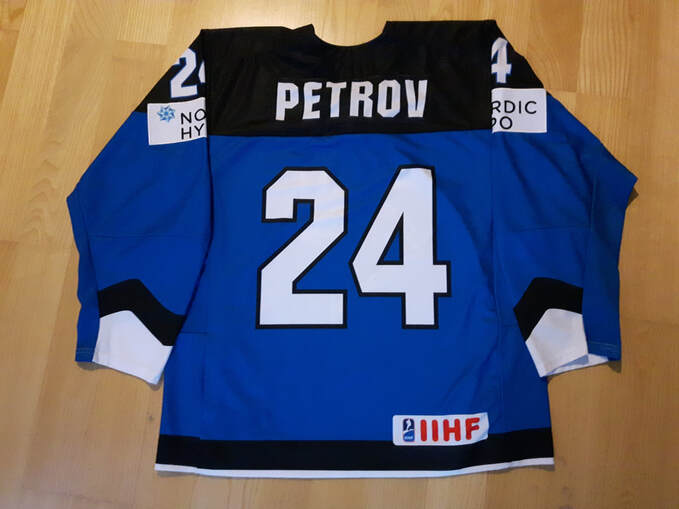 This Estonian national team game worn jersey was used by one of the most legendary Estonian ice hockey players, Alexander Petrov in 2019 Division 1B World Championships in Tallinn, Estonia. This time Estonia didn't manage to renew medal position from 2018 but were forced to settle with 4th position with equal amount of points with Japan.

Estonia wore blue jerseys in all of their games:

The 1983 born forward scored 1+2=3 points in the tournament.  The lone goal was scored against Ukraine. He has represented Estonia in men's national team since 2001 in total of 15 times (until 2019). He has played most of his career in Italy but also in Russia, Latvia, Finland, France and Norway. 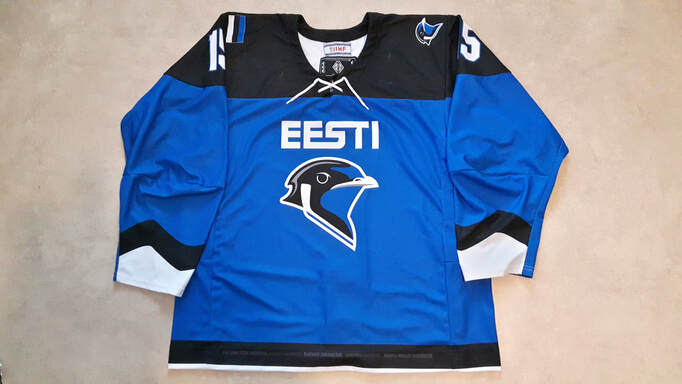 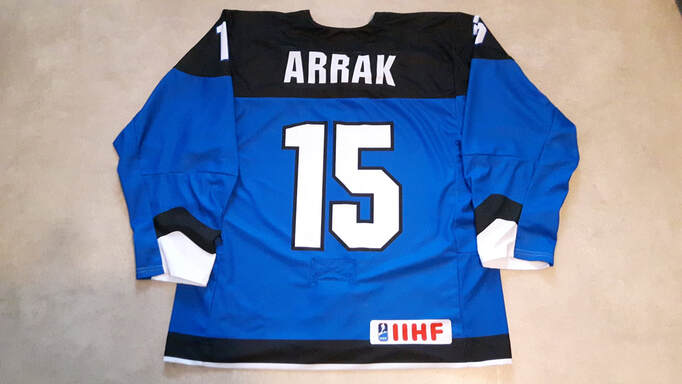 Arrak scored 1+1=2 in the tournament and he scored his first goal as a member of men's national team wearing this jersey against Croatia. He has played professional hockey in Finland and most recently (2019-20) in Alps Hockey League in Austria. 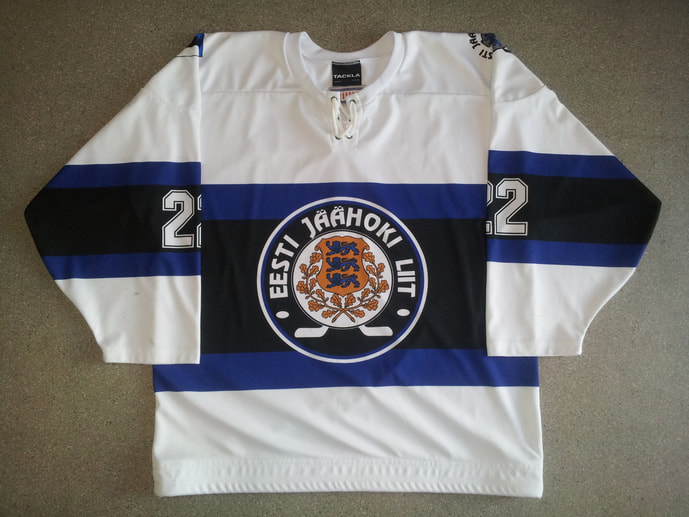 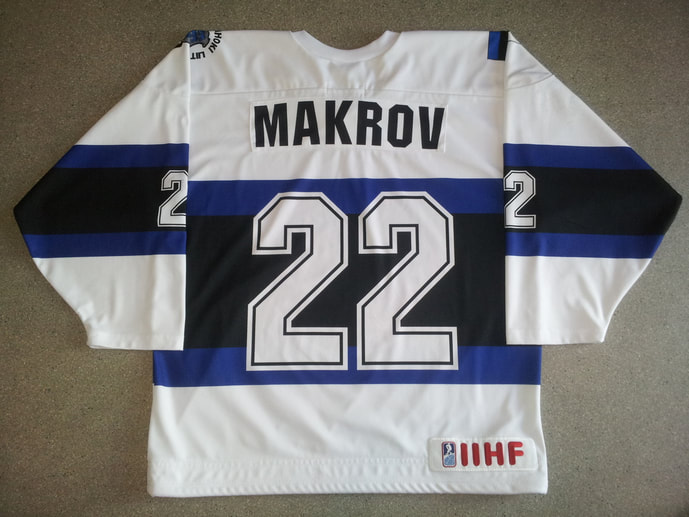 This Estonian national team game worn jersey was used by one of the most successful and best Estonian hockey player of all times, Andrei Makrov, in 2016 Division 1 group B World Championships in Zagreb, Croatia and Olympic qualification preliminary tournament in Budapest, Hungary. Makrov was alternate captain in the Olympic qualifications thus there is a sign of removed 'A' from the chest.

The Olympic qualification tournament was played in February. Estonia lost in its opener to Poland 2-6, to the host Hungary 1-7 and in the last game Estonia managed to surprise Lithuania 4-1 despite being outshot 56-26. It set the tone for the teams' rematch which would be played two months later in Zagreb. Estonia wore white jerseys only against Lithuania and Makrov scored his team's 1st and 4th goal in the game.

Estonia used black jerseys against Ukraine (L 1-7) and against Romania in their last game of the tournament which Estonia won 3-0. That meant that Estonia will play third time in a row in Division 1 group B World Championships in 2017.

Makrov has played professional hockey in Russia, Finland, Belarus, Austria, Slovenia, Kazakhstan and in 2015-16 he was transferred to EPIHL team Telford Tigers in Great Britain. He is a very skillful player with great playmaking skills and many people have said that with better practise and better mentality he would have made it to the better European top level leagues but he has had a very long and successful career nevertheless. 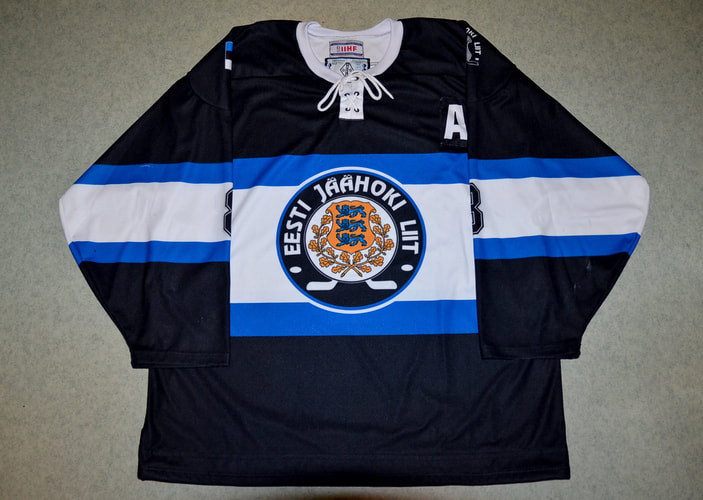 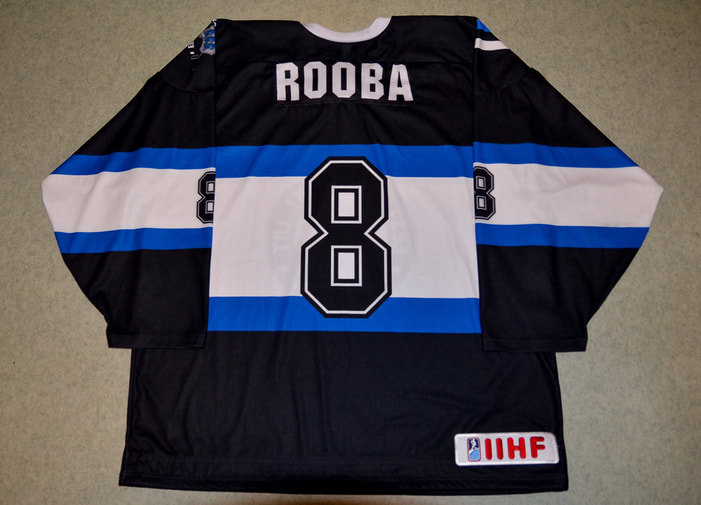 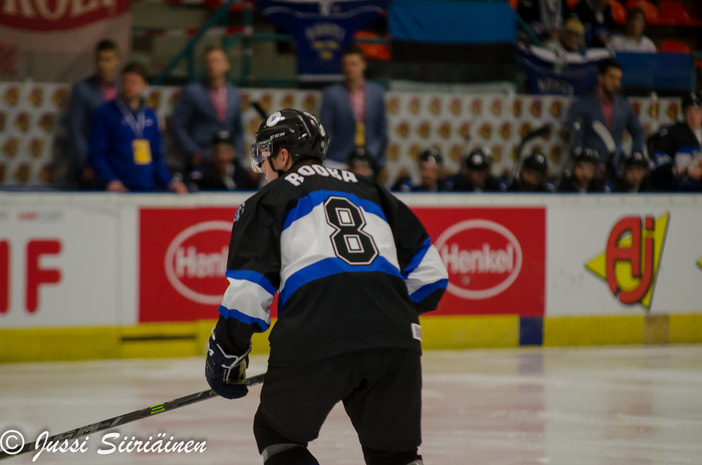 The 1993-born big-sized and skilled forward made his senior national team debute already in 2010 Division 2 World Championships in Narva, Estonia. The team was coached by Finnish head coach Ismo Lehkonen who selected then only 16-years old prospect to the national team. Rooba scored very respectable 3+2=5 points in his first senior team tournament.

Rooba was born in the capital of Estonia, Tallinn and he started his hockey career in Estonia. Before he turned 15, he moved to the capital area of Finland to play in Espoo Blues. He have played in all junior Finnish Championship levels and have secured a position in Blues' SM-liiga roster.

Rooba has used his strength and playmaking skills to provide good scoring chances for his teammates but he knows also how to put the puck into the net. He have scored points in his club teams but his scoring ability has been worth gold in the national team along with older Estonian national team forwards such as Andrei Makrov.

Rooba is on a good way to become perhaps the best Estonian player ever. Currently the biggest legends in Estonian ice hockey are (not in ranking order) already mentioned Makrov, Lauri Lahesalu, Toivo Suursoo and Dmitri Rodin (formerly Suur).

In Eindhoven Rooba was lined-up in the first line with Makrov and Riho Embrich. The line was in charge of 7/10 goals Estonia scored in the whole tournament, of which remarkable 6 was scored by Makrov. Rooba's catch was 1+3 and -2 in the tournament.

The design for this jersey came from long-time ice hockey contributor in Estonia, Ahti Jõgi. The design is pretty similar to Chicago Blackhawks' 2009 Winter Classic jerseys but of course the color scheme is based on colors of the Estonian flag. Estonia used neck laces in their previous jerseys and they decided to stay with the laces with these jerseys and the outcome is absolutely gorgeous. The front crest inside the ring is actually the Coat of Arms of Estonia including the golden color and blue color of the three lions. Overall this is definitely one of the best-looking national team jerseys ever. The only minus is that the sleeve number should be on the brachium area, close to shoulder, not on elbow.

One special detail is that the IIHF patch is exceptionally sewn onto the jersey. Usually it is sublimated but there is no sublimation under the patch so the manufacturer have forgotten to sublimate it. The sewn IIHF patches are only included in elite World Championship teams' jerseys so this is a very nice feature. Despite the jersey is pretty much black, there are some stains and puckmarks visible on the sleeves. The jersey is photomatched to the white stain on the left sleeve.

The nameplate and alternate captain's 'A' is sewn with individual letters sublimated onto it. The numbers and crests are sublimated. The jersey is made by Tackla.

The jersey, as all the jerseys below, were obtained from team Estonia after their final game in Eindhoven. All of them were also used in the tournament. 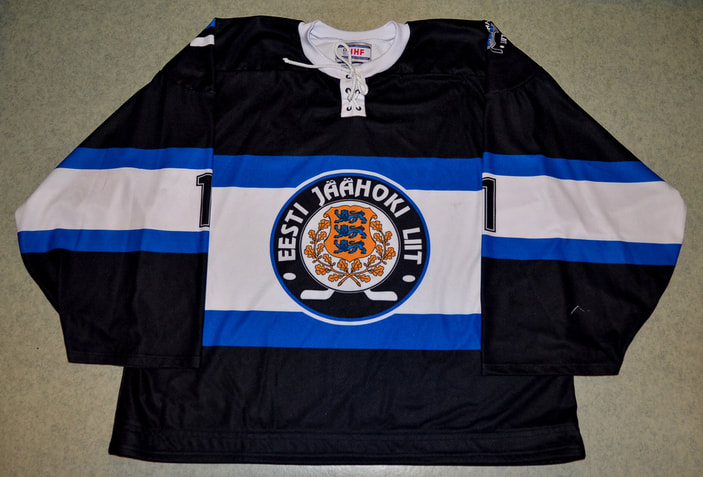 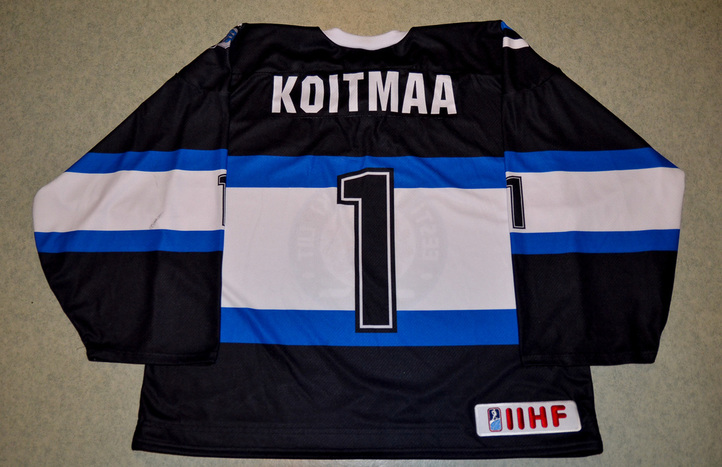 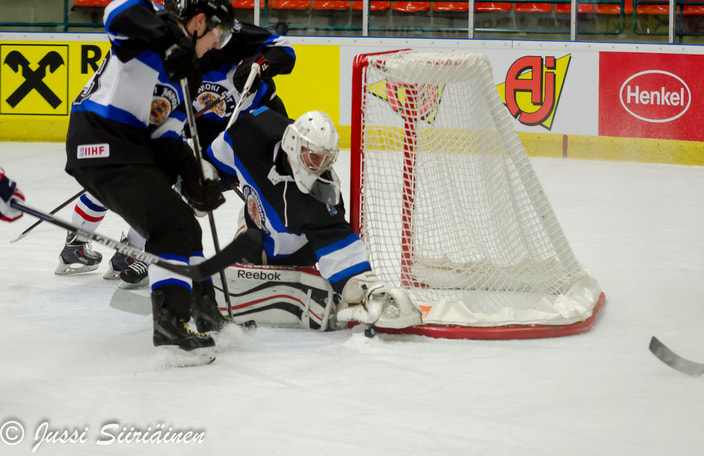 This is the Estonian national team game worn jersey used by goalie Villem-Henrik Koitmaa in 2015 Division 1 group B World Championships in Eindhoven. The jersey is photomatched to the black puckmark on the white stripe on the glove hand side sleeve.

Koitmaa was starting goalie in games against South Korea (L 3-7) and Croatia (L 2-5). Estonia used black jerseys on both of those games. Koitmaa allowed 10 goals in the tournament (two empty net goals in his games) and his SVS% was only 87,18.

He was born in 1990 but despite his young age he is very experienced goaltender on international level. His first stint in Estonian goal was already in 2007 in U18 Division 2 World Championships. His first senior tournament was 2009 Division 2 World Championships in Novi Sad, Serbia. Estonia was a huge favourite to win the tournament but the team arrived to Serbia by bus only hours before their first game against the host Serbia. Tired from the trip Estonia lost sensationally 5-4 after penalty shots. Both teams continued the tournament with straight victories which meant that Serbia was promoted to Division 1. Koitmaa didn't play in the first game but he played all remaining 4 games.

Koitmaa played three seasons in Finland between 2008-2011 on many levels between Mestis (2nd tier) and II-divisioona (4th tier), both on junior and senior level. His playing style used to be very aggressive butterfly style which was possible thanks to his very exceptional flexibility. That have caused him some serious injuries which have kept him out of the ice for a long time.

In Eindhoven he played more calmly and wisely than earlier so he is likely gonna be there to help Estonia for many more years.

There are some puck marks on the white part of the sleeve and there's a small tear on the glove side sleeve. 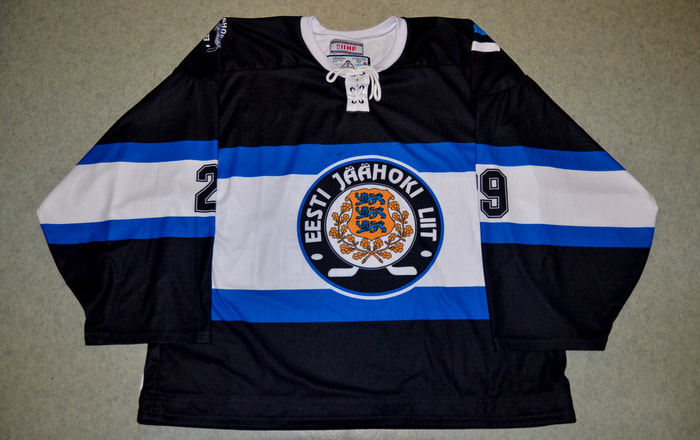 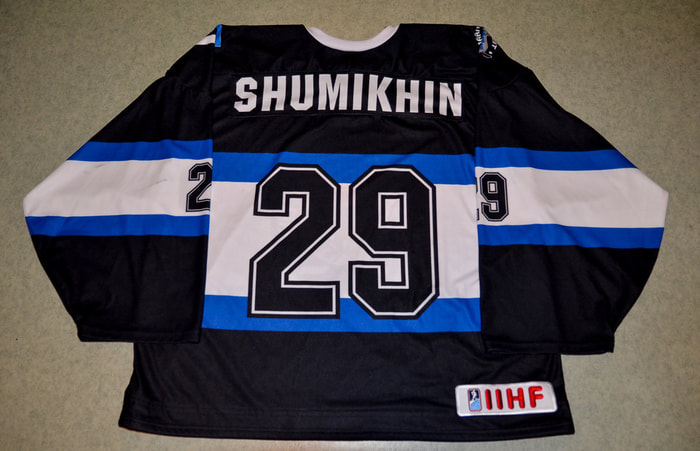 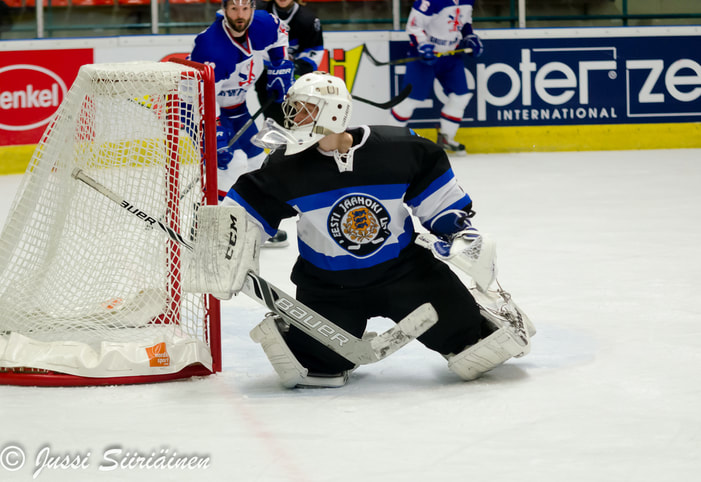 This Estonian game worn goalie jersey belonged to goalie Roman Shumikhin (or Sumikhin). Shumikhin played three games in the tournament of which one was played wearing the black jersey. The game was against Great Britain which Estonia lost after a late 3rd period goal only 1-2 despite the game was supposed to be very one sided. The saves were pretty even, Shumikhin 30 saves and British goalie Ben Bowns 29 saves. Despite the numbers suggest a very even game, the British were able to produce more quality scoring chances and had more depth in their roster.

Shumikhin played also two other games, 1-6 loss against Lithuania and the final and relegation-decicive match against the host, The Netherlands. Estonia had to win the game in regulation to stay up in the division. Shumikhin made marvellous saves throughout the game and the hattrick scored by Andrei Makrov guaranteed Estonia 3-1 win and position in the same division for 2016.

Shumikhin and Estonia were at times in trouble against big-sized Dutch players, especially after The Netherlands got a lucky goal in the middle of 2nd period. In the 3rd period The Netherlands was trying hard to equalize the game and got few super magnificient scoring chances in the opening frame. They even managed to miss a completely open net by shooting slightly wide right infront of the net. After that the Dutch players started to get frustrated which resulted in stupid, undisciplined penalties and weren't able to produce a comeback.

The wear consists of some puckmarks on the white part of the sleeve and on the front. The jersey is photomatched to the puckmark on the blue stripe above the front crest, right above the word "JÄÄ". 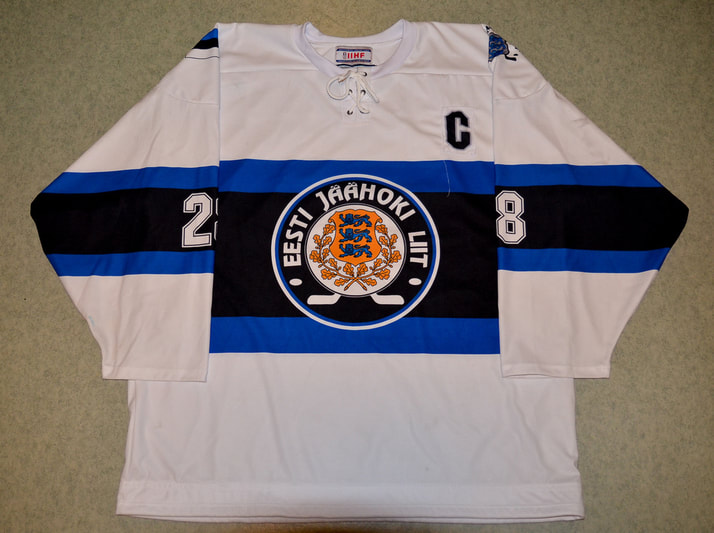 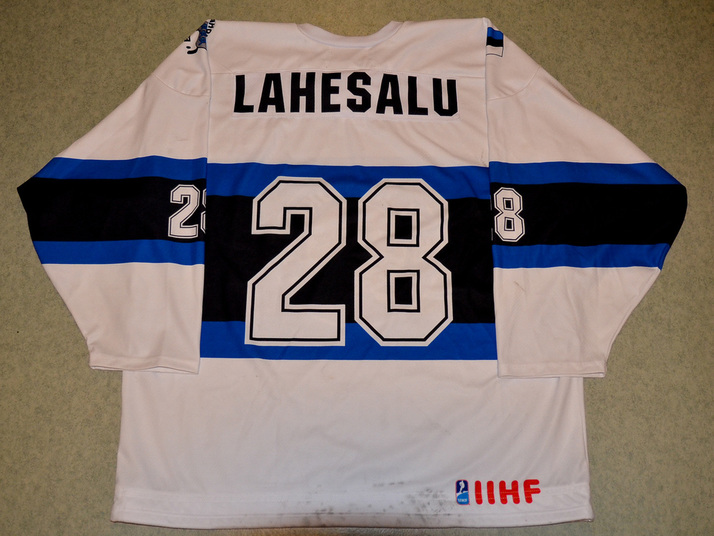 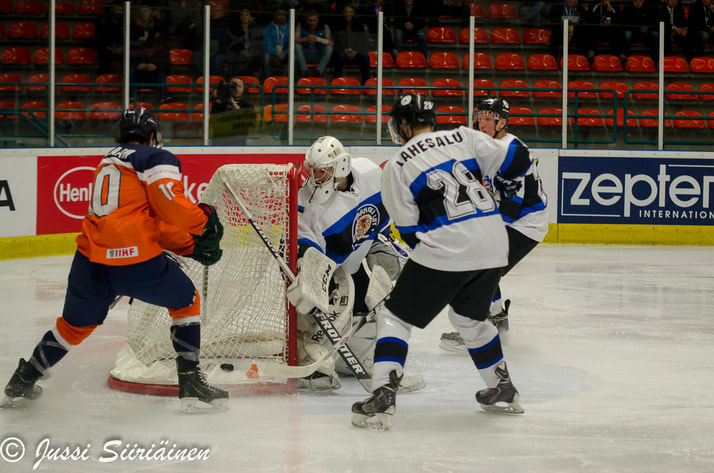 This is the game worn jersey of the captain of Estonia in Eindhoven, veteran defenceman Lauri Lahesalu. White jerseys were used in games against Lithuania (L 1-6) and The Netherlands (W 3-1).

Lahesalu is one of the best Estonian players in the history. He has experience from top levels of Finland, Denmark and France. He arrived to Finland to play in U20 SM-liiga in season 1997-98 when he joined Tappara Tampere. He played two seasons in Tappara and during that time he already made his senior national team debute in 1998 Pool B World Championships as a 19-year-old.

After Tappara, he switched to Ässät Pori to play his last U20 season there. He also made his senior debute during the same season 1999-00 in HeKi Heinola where he played on loan two games in Suomi-sarja (3rd tier). He started his journey in Mestis, the 2nd tier of Finland, in season 2000-01 with Jokipojat Joensuu and following seasons with TuTo Turku and then Hokki Kajaani. He finished tied 1st in defencemen's scoring table after 2001-02 campaign in TuTo and tied 3rd after 2002-03 in Hokki.

His abilities in the offencive department were also noted in SM-liiga and Kärpät Oulu signed him for 2003-04 season. He played 6 games in Kärpät and scored 1 assist. He returned to Hokki to play on loan 15 games in Mestis. He have probably suffered from injuries because those were all the games he played during the season. They were also the only games he played in SM-liiga. He was the second Estonian born and trained player in SM-liiga after Toivo Suursoo.

Lahesalu spent 2004-05 season in Odense, Denmark and after that he have played for Angers or Rouen in French league.

In Eindhoven Lahesalu got 0+2=2 points and -3 to his statistics column. The jersey has some puck marks and a lot of stains on the backside of the hem. The captain's 'C' and the nameplate are sewn with individual letters sublimated onto it. All other numbers and crests are sublimated. The jersey is photomatched to the big area of stains in the hem on the back.