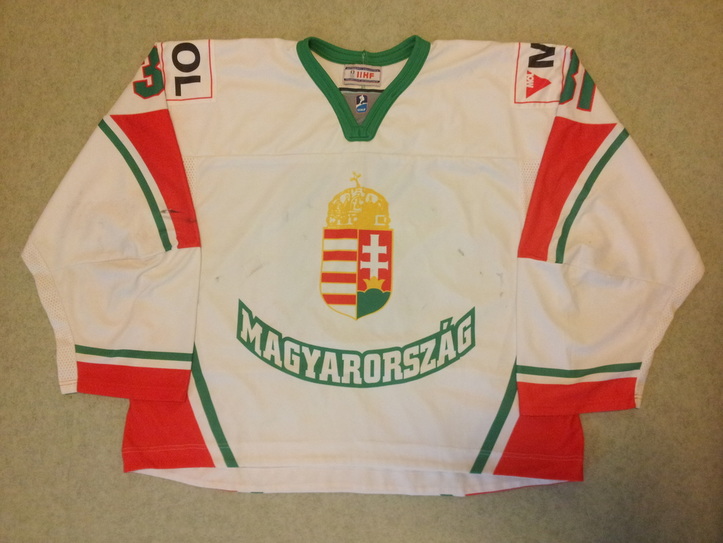 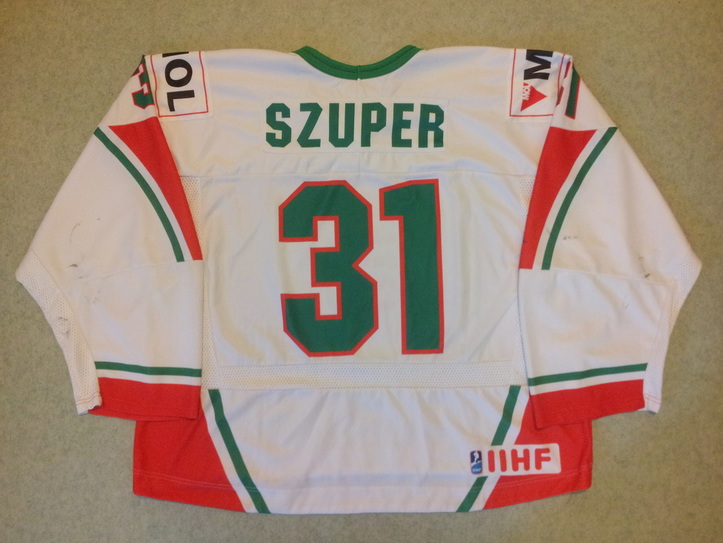 This team Hungary ice hockey national team game worn jersey was used by goalkeeper Levente Szuper in 2013 Division I group A World Championships in Budapest, Hungary. Hungary finished 3rd behind the winner Kazakhstan and silver medallist Italy and missed promotion. Hungary wore the white jerseys only against Great Britain (W 4-2). Szuper was the starting goalie in the game and he made 18 saves.

In their next game Miklos Rajna started between the pipes against South Korea. Hungary seemed to roll into easy victory as they had a solid 4-1 lead after 2nd period. South Korea didn't give up and managed to tie the game in 10 minutes from the beginning of the 3rd. South Korea won the game in shootout competition and shocked Hungarian home crowd couldn't believe what had just happened. It was a major upset for their hopes of promotion and it meant that they must win either Italy or Kazakhstan in regulation to even dream about Pool A World Championships.

Next opponent was Kazakhstan, a very strong team for Division 1 level. Hungary wasn't afraid of their opponent and tried to give some pressure on their defence. Kazakhstan had some very dangerous scoring chances in the 1st period but with some luck and skill Szuper kept the game scoreless. The passionate Hungarians gave the best support they could offer to their national team and it paid off. Hungary scored 1-0 after mid way of the game and the arena exploded. Kazakhstan didn't give up and tied the game only few minutes later with a little luck. Many would have thought that Hungary's spine would snap and Kazakhstan would get the hold of the game after the tieing goal.

Kazakhstan did generate more scoring chances in the 3rd period but Hungary scored 2-1 goal on a power play after Kazakhstan's Roman Starchenko took a penalty for playing with a broken stick. After that it was a pure survival fight for Hungary. They took two penalties later in the period which made the audience bite their nails off but kept singing and chanting to give energy for the penalty killers. The home crowd could breath a bit more calmly when Kazakhstan took a penalty only 2.19 remaining of the 3rd period. Hungary didn't nerve too much and could keep the puck possession most of the time but Kazakhstan got some chances. When the final buzzer saved Hungary, the roof of the arena got airborne. The players and the fans were celebrating as if they had won the World Championship.

The fans singing Hungarian national anthem gave chills to everyone at the arena. The fans were waiting for the players at the players' entrance and the nearby subway station was filled with singing and happy Hungarian hockey fans. Especially Szuper was very cheered hero, thanks to his 39 saves in the game.

Now everything was in the Hungarians' hands. They faced Italy in their next game and Szuper continued as the starting goalie. Both teams scored once in the opening frame and the game was very even. One of Hungary's 6 penalties was costly in the midway of the 3rd period when Italy scored game winning 2-1 goal. 24 saves for Szuper and now the fate of promotion was in the final day's second game Italy-Kazakhstan. Italy had already secured their promotion and Kazakhstan was in a must-win situation. Italy put Andreas Bernard to start his first senior national team game and many Hungarian fans in the game hoped from the bottom of their hearts that Italy would win the game.

That didn't happen. Italy didn't show much in the game as all their pressure was gone and Kazakhstan took a safety 3-0 win which made the last game of the tournament, Hungary-Japan, "only" a fight for bronze medal. Szuper had fulfilled his duty and Miklos Rajna played the game. Hungary won the game 1-0 with their early 1st period goal and the home team and home crowd got some consolation for missing the promotion.

The tournament was the last for Szuper who had only done some goalie coaching in the season 2012-13. He picked up his goalie gear only some time before the tournament and practised to be in shape. Considering how long break he had had from real hockey games, his performance was spectacular.

Szuper is Calgary Flames' 4th round overall draft pick #116 in the year 2000. He have played junior hockey in OHL, Canada and few seasons in AHL and ECHL before returning to Europe where he have played in Hungary, Sweden, Italy, Germany and lastly in Kazakhstan.

The jersey has excellent overall wear with plenty of puck marks. The numbers and front crests are sublimated. The "MOL" sponsorship patches are sewn. The jersey is made by Tackla.

The jersey was obtained from a personal collector from Canada.
Return to IIHF jerseys E-H