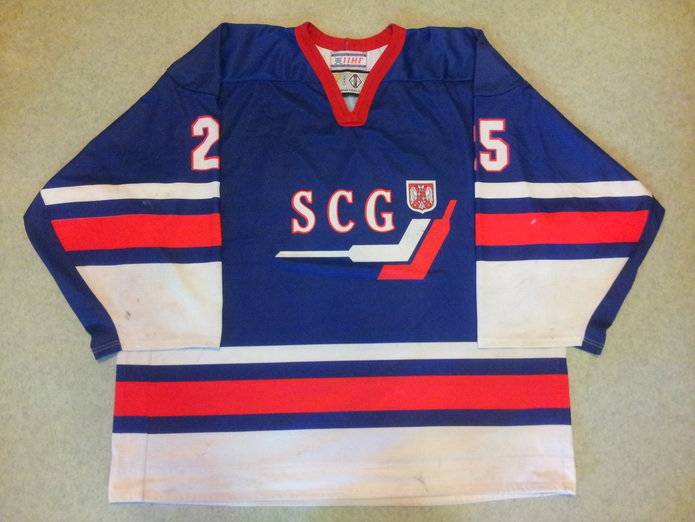 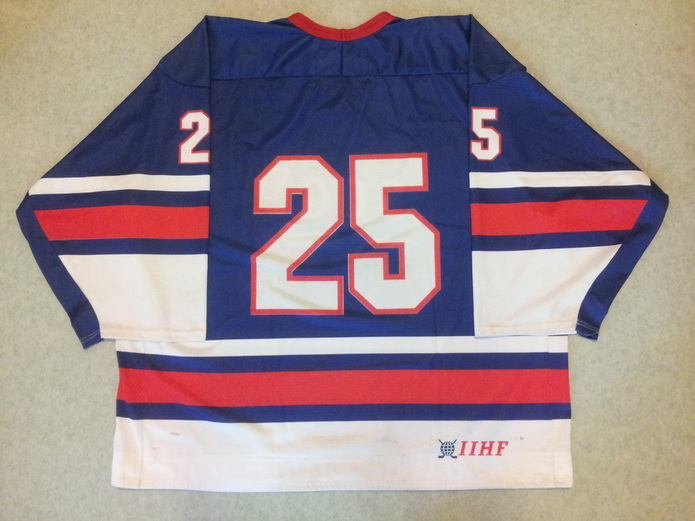 This jersey was used by goalie Tihomir Zecevic. In 2005 Serbia lost only one game, 1-5 to Israel which would eventually promote to Division 1 for 2006. Zecevic played all games for his team but he was substituted to backup goalie Milan Lukovic in two games where his team had a blowout lead. The jersey was used only against Israel. In all other games Serbia-Montenegro dressed up white jerseys. Serbia-Montenegro missed the promotion by only 1 point despite they scored most goals and conceded least goals in the tournament (30-10). Zecevic was 2nd in goalie statistics with SV% 92,62 and remarkable GAA 1.99.

In 2006 Serbia-Montenegro started with a routine victory over Spain (4-1) but in the next game they were forced to tie game 2-2 against Belgium despite the shots went to SCG 32-20. Third game against Bulgaria ended to the host team's 4-2 victory which meant SCG's hopes for promotion were gone. In next game SCG humiliated South Africa 14-5. That was Lukovic's first start in the tournament and he made only 12 saves. Zecevic returned to the net for their final match against Romania. Romania had steam rolled over all their opponents so far and SCG didn't have a chance despite they scored the first goal of the game. Zecevic was pulled when Romania was ahead 8-1 in the 3rd period. Romania won the game 11-1 and SCG finished 4th in the tournament.

Zecevic started all but 1 game (South Africa) and SCG played using blue jerseys against Spain, Belgium, South Africa and Romania. This time his statistics weren't as praising as in 2005. His SV% was only 80,77, GAA 4,24. It was his last tournament in Serbia-Montenegro (or Serbia) national team. He represented Yugoslavia in three men's World Championships and in several U18 and U20 tournaments.

The name plate has been removed from the jersey and there are plenty of puck marks on the jersey. The jersey is exceptionally only size XLG, usually all Tackla goalie jerseys are size XXLG. The jersey was obtained from a collector from Serbia.
Return to IIHF jerseys S-Y