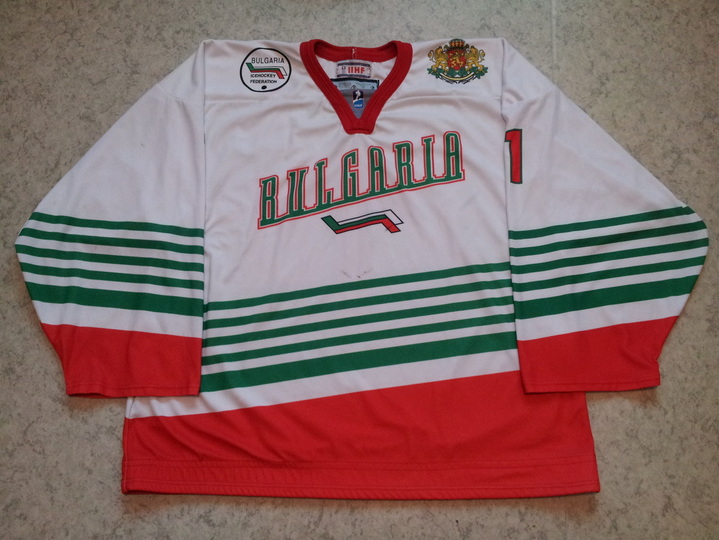 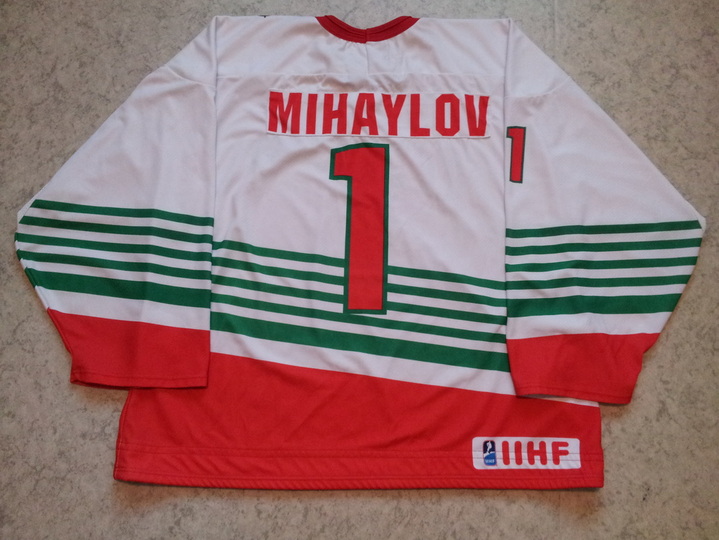 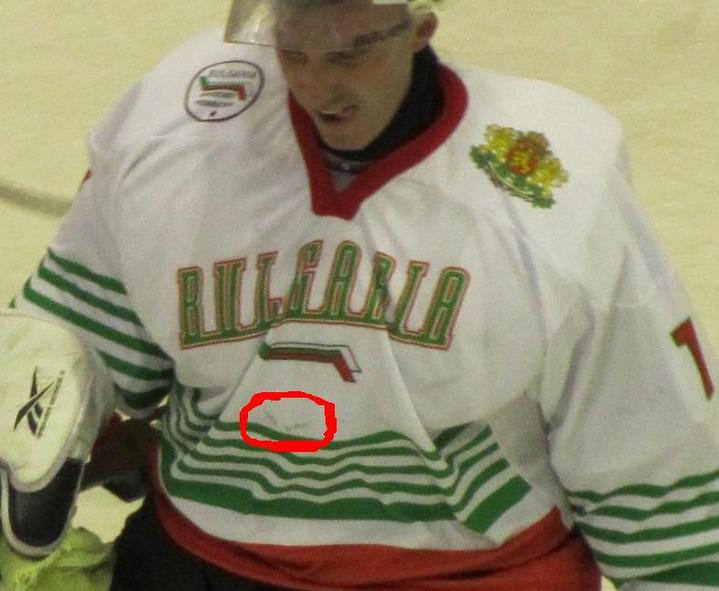 This is team Bulgaria ice hockey national team game worn jersey of the legendary goaltender Konstantin Mihaylov worn in 2011 and 2012 division II world championships in Croatia and Bulgaria. A friend of mine wrote an article of him for IIHF during the 2011 tournament and that was supposed to be the last tournament of his career but he still played two games in 2012 World Championships in Bulgaria. Here's the link: Goalie legend's swansong.

I researched all the photos I took in Croatia to find a photomatch for the jersey and there it is. There are plenty of puck marks in the jersey but the double puck marks (inside the red circle) gave the final evidence. Nowadays when the lower division world championships are also somewhat covered with also photographers gives a chance to find a photomatch, but basically the best chances to find them is to go to the tournaments personally.

Born in 1964, Mihaylov's first national team appeareance was back in 1981 when he dressed for U18 European junior championships. He played remarkable 25 senior national team World Championship tournaments between 1985-2014 including the 1992 and 1993 pool B world championships and the wrong time, wrong place -pool C world championships in 1994. In 1993 Bulgaria finished last in the 8 team tournament with 0 points and goal difference 9-60 and was relegated to pool C. Next year was more than horrible for Bulgaria when they had to face Slovakia, Belarus, Kazakhstan, Ukraine, Slovenia and Hungary.

Mihaylov played all 6 games with SVS% 76,1 including 0-31 losses against both Slovakia and Ukraine. Bulgaria's goal difference after the tournament was 3-115. After just 6 games. Smallest loss was against Hungary 2-7 and Bulgaria finished last.

Mihaylov ended his long and astonishing career in 2013 after Division II B World Championship tournament. The tournament was very unfortunate for Mihaylov himself and Bulgaria. He got injured in the first game and the backup goalie wasn't much of help to Bulgaria. That resulted to Bulgaria's relegation to 2014 Division III tournament.

The jersey was obtained from a private collector from Bulgaria. 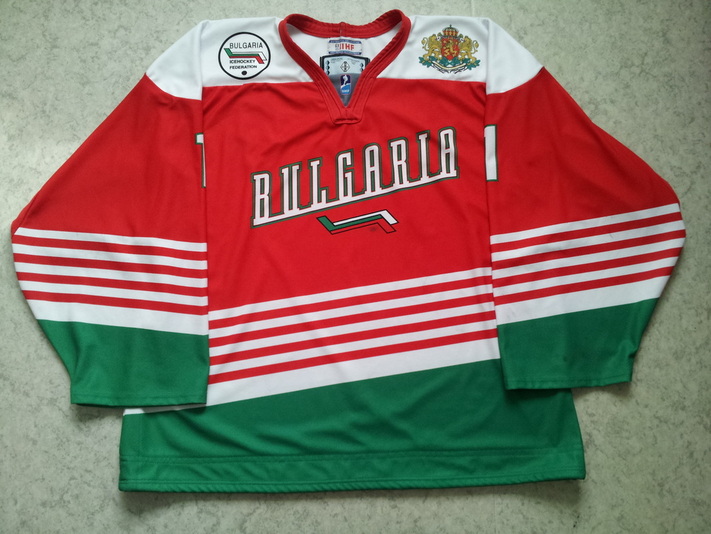 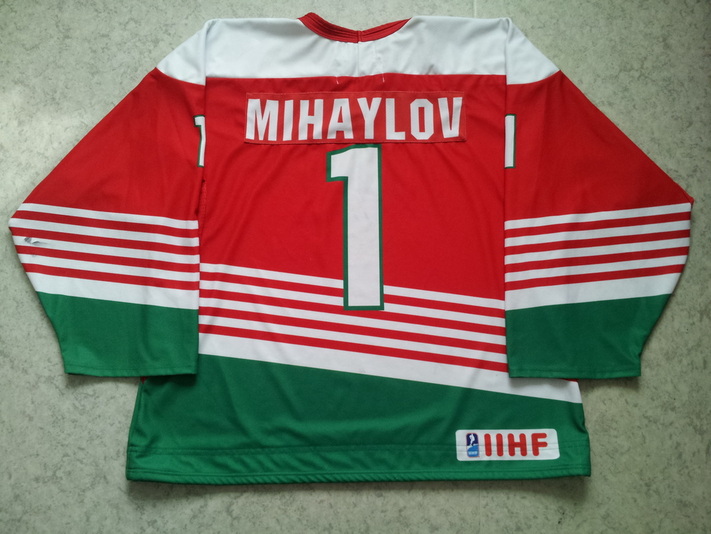 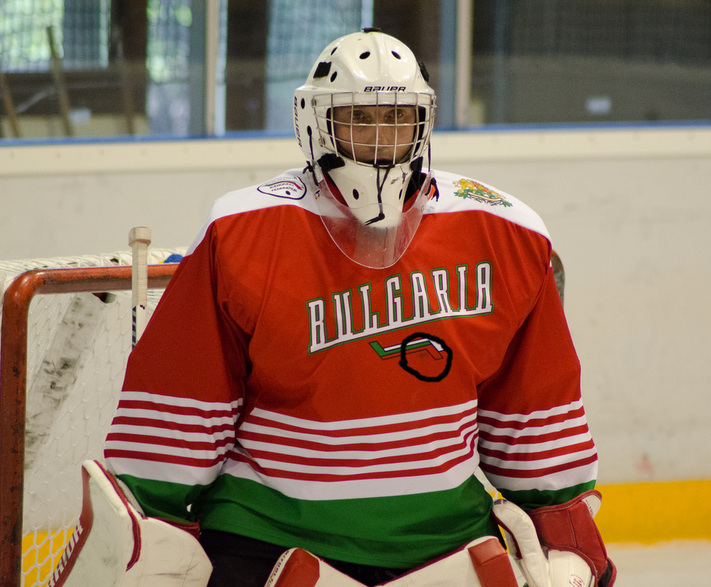 This is very special and unique piece of international ice hockey. As mentioned above, Konstantin Mihaylov was supposed to quit his career in 2011 but he returned in 2012 and even in 2013 and by that he was sure he would quit from the national team. It was very close to happen, as a matter of fact. Their designated starting goalie Nikola Nikolov got injured only some weeks before the 2014 Division III World Championships. Mihaylov hadn't played at all during the whole season except the time he have spent teaching young goalies in Bulgaria. Then 49-year old goalie practised only few weeks on ice before the World Championships.

This red jersey is from 2013 Division 2B WC in Izmir, Turkey and 2014 Division III WC in Luxembourg. He proved he was still in top shape as he basicly single-handedly promoted Bulgaria to 2015 Division 2B World Championships. Bulgaria faced the host Luxembourg in the opening night and the game almost became a nightmare for Bulgaria as they managed to blow 3-0 lead to 3-4 in favour of Luxembourg and half way through they were losing 4-5 but individual talent of some Bulgarian players turned the game to Bulgaria's 8-5 won. That jersey was used in that game.

In next game Bulgaria continued with red jerseys but this time Mihaylov was the backup goalie against United Arab Emirates. Bulgaria won the game rather easily 11-5.

Next opponent was the debutant Georgia which was the worst team in Division 3 since Greece in 2011 and Armenia in 2005. Bulgaria used white jerseys and Mihaylov was again in the bench. Georgia had only a handful of shots during the whole game and Bulgaria won 19-1 even they benched their best players and basicly walked 2nd and 3rd period.

4th game was against another newcomer, Hong Kong whose previous and only performance was from 1987 Pool D World Championships. Hong Kong gave a very good opponent against Bulgaria but Bulgaria won the game 6-1. Mihaylov started but he was substituted at 47.59. Again Bulgaria used white jerseys.

Final game for Bulgaria was the promotion decicive match against North Korea. Both teams were unbeatable but North Korea had proved their team play skills were much better than Bulgaria's. Bulgaria's chance was Mihaylov's superior performance and 1st line's scoring ability.

In 1st period Bulgaria was completely outplayed by North Korea and shots were amazingly 20-2 and North Korea were up 1-0 when heading to first intermission.

In 2nd period Bulgaria started slowly to get used to North Korea's playing style and could produce some scoring chances. Despite that North Korea was very close to increase their lead. North Korean player got a breakaway and I've never seen a player had some much time and space in a breakaway that he STOPPED infront of the net to try to deke Mihaylov out of position. He almost succeeded but absolutely ridicoulous robbery by Mihaylov saved Bulgaria. You can take a look at the scence at the photo gallery in my website: http://gamewornjerseys.weebly.com/bulgaria-northkorea.html

And what happens in hockey if you don't use your chances? That's right. The opponent will score.

Bulgaria's top line Ivan Hodulov - Stanislav Muchachev - Alexei Yotov used their size and skill and turned the game in 2nd period from 0-1 to 2-1 when heading to 2nd intermission. After the 1-1 tie North Korea got a massive rush into the net and Mihaylov and several players were inside the net and the players alrady raised their hands for a goal. The referee called the goal judge for a negotiation and after a long discussion the goal was not allowed because no one could tell if the puck crossed the line.

In 3rd period North Korea did all they could to get the puck behind Mihaylov but shot after another was stopped by the grand old man of Bulgarian hockey. Meanwhile Hodulov and Yotov scored their 2nd goals of the game and that sealed the deal. Bulgaria won the game 4-1 despite North Korea outshot them clearly 49-20. It's a funny coincidence that Mihaylov faced equal amount of shots than his age was during the tournament. He was rock solid during the game and after the final buzzer he was surrounded by his teammates for celebration.

It was very emotional moment for Mihaylov and he had some tears in his eyes because it was finally the end of his magnificent and unique 29 year long career in the national team. The only thing that slightly spoiled the party was that he was not selected the best player of Bulgaria in the game. It wasn't even any of the goal scorers but 0 points gathered forward Martin Nikolov. Everyone in the building knew who that award should have been given to but that didn't take anything away from Mihaylov's performance. Without him Bulgaria would still continue in Division III.

I was able to purchase his red jersey right after the final game. It's another gemstone in my collection and I feel very honoured to own such historic jersey from a true hockey legend.
Return to IIHF jerseys A-D