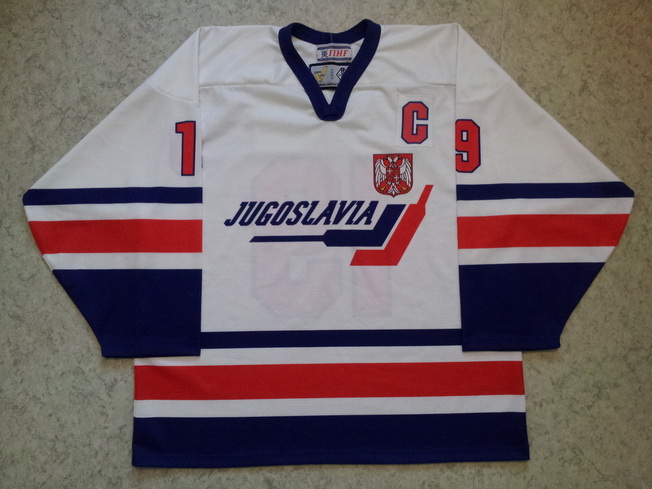 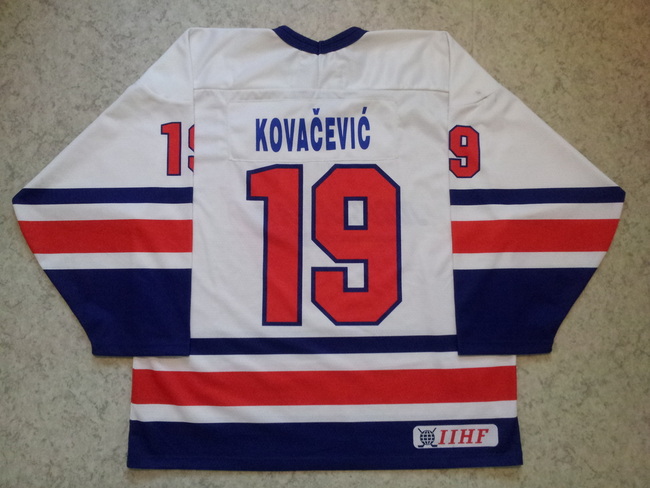 This is a very rarely seen Yugoslavian ice hockey national team game worn jersey used by one of the best players from former Yugoslavia, forward Marko Kovacevic. The jersey was used in the season 2002-03 which was the last season Yugoslavian national team played using jerseys which had 'Jugoslavia' on the front before it was changed to 'Serbia and Montenegro.' Later, in 2006 Serbia and Montenegro became two independent countries. 2002-03 was the first season for all division level teams using the modern Tackla-made jerseys.

The jersey was used in 2003 U20 Division 2 World Championships in Novi Sad, Yugoslavia (located in Serbia) and/or 2003 U18 Division 2 World Championships in Belgrade, Yugoslavia (Capital City of Serbia). In 2002 it was officially decided that what was left from Yugoslavia will be called 'Serbia and Montenegro.' The name was officially changed on 4th of February in 2003 but the U20 tournament was played around the New Year of 2002 and 2003. In the IIHF documents the official abbreviation of the team was 'YUG', the tournament was held in Novi Sad, Yugoslavia but in the official standings the team is named 'Serbia and Montenegro.'

The U18 tournament was played in March so the official change of the name had been executed. This time the team's name in all documents was still Yugoslavia.

Kovacevic, born in 1985, is a very exceptional hockey player. There are three members in the triple-club, players who have represented their national team in U18, U20 and senior elite World Championships during the same season. The first were two Belarussians, Andrei Kostitsin and Vadim Karaga in 2003 and later Swiss super prospect Kevin Fiala in 2014.

Kovacevic did the same trick in division level already in 2001 at the age of 15. There might be other players who have the same achievement on lower divisions but what's very remarkable, is that he did it not once, not twice but three! times. In 2001 the U18 and U20 teams played in Division 3 and senior NT in Division 2. In 2002 he played in same divisions but in that season he was key factor in promotion both junior categories to Division 2. Especially U18 team had a lot of kudos to give to Kovacevic as he scored remarkable 11 goals and 4 assists in the tournament and won the scoring title.

He was not only gathering experience on the senior tournaments he participated as a teenager. In 2001 he scored 2+1 and a year later 3+1 so he had an immediate impact to senior games. His tournament performances had some influence on his career as he was signed to Ontario Hockey League in 2002 to play for Sudbury Wolves for one season.

During that season he played his last junior World Championship tournaments. In the U20 tournament he finished 3rd in scoring table gathering 7+5=12 points. He included also 34 penalty minutes to his stats column. The scoring title was won by his team mate Dejan Bugarski with astonishing 14+6=20 points. The duo helped Yugoslavia to gather 3 wins and 2 losses in the tournament which would give them 3rd position and bronze medals.

Kovacevic couldn't tally as many points in the U18 tournament few months later and his points were 3+2=5. What is exceptional was that he almost doubled his penalty minutes: totally 61. This time Yugoslavia had to exit the arena empty handed as they finished 4th only 1 point behind bronze medal winners, The Netherlands.

The statistics don't tell which teams' captaincy he had during the season and it's possible that this jersey was used only in one of the tournaments.

After the season in Sudbury, he switched to St. Andrew's College which played in CISAA (Conference of Independent Schools of Ontario Athletic Association). 2004-05 he didn't play in any national team events. In 2005 he returned to North America after spending one season in Serbian league. He went to play in McGill University for 4 seasons in CIS (Canadian Interuniversity Sports league). After graduation he returned to Serbia in 2009 to represent HK Partizan Beograd in Slohokej and Serbian league. 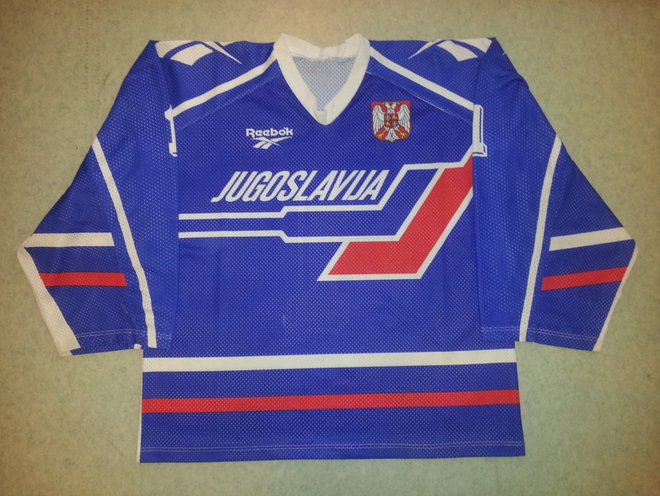 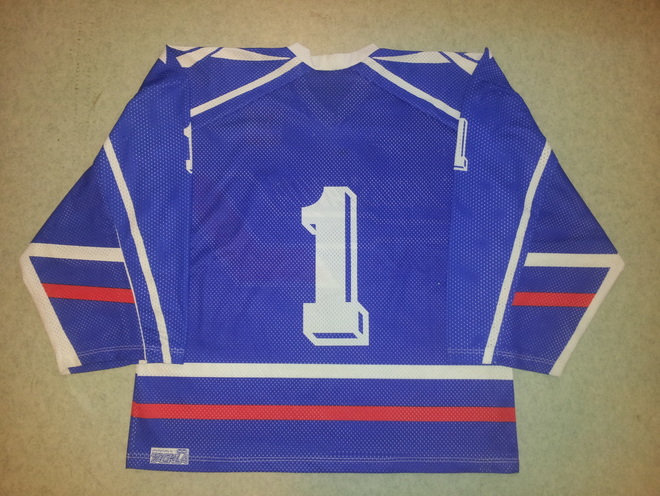 This game worn Yugoslavia national team jersey was used by goalie Miroslav Radak in 1995 Pool C/A World Championships hosted by Sofia, Bulgaria. The tournament consisted of three 3-team preliminary round groups and three 3-team ranking groups. Yugoslavia played in preliminary group C in which it lost to Ukraine 3-15 and to Hungary 1-9. The last positioned preliminary group teams played in a relegation group and 2 teams out of 3 would be relegated to lower pool. Yugoslavia lost 3-7 to Slovenia and won Bulgaria 6-0 but despite the win Yugoslavia and Bulgaria were relegated.

The jersey has many puck marks here and there and there are also clear signs of removed name plate. The jersey is branded as Reebok but it was manufactured by Tackla.
Return to IIHF jerseys S-Y