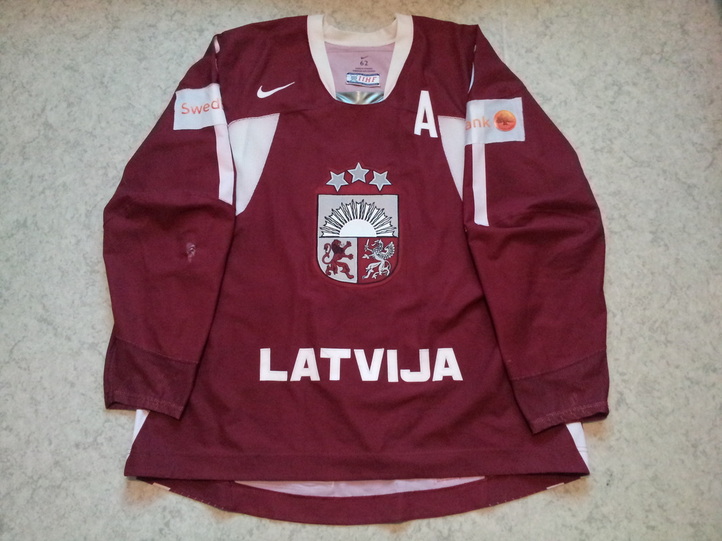 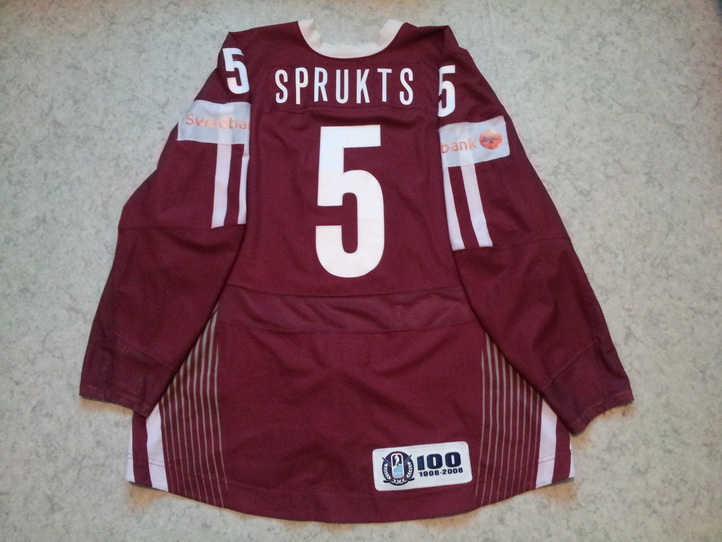 This beautiful maroon team Latvia ice hockey national team game worn jersey was worn by a long-time serving national team forward Janis Sprukts in 2008 World Championships in Canada. The jersey has pretty good overall wear, consisting of few puck marks and a noticeable hole on right-hand sleeve's elbow side. Latvia had different shoulder patches in the tournament but Latvia used the same jerseys in the olympic qualification tournament in Latvia in February 2009. In the qualification tournament Latvia had these shoulder patches but they used only white jerseys in the tournament. All numbers, letters, crest and patches are sewn.

Sprukts represented Latvian senior national for the 1st time in Russia 2000 when he was only 18 years old. During that time he played in Finland for the U-20 team of Lukko Rauma and next year he played his first games in Finnish Elite League in Lukko. In Finland he have also represented HPK Hämeenlinna.

Sprukts have played professional hockey in Finland, Canada, USA, Denmark, Latvia, Belarus and most recently in Russia. He is also 2000 draft
8th round pick of Florida Panthers. He have played two seasons and 117 games in AHL team Rochester Americans netting very respectable 34+72=106 points overall. 2006-07 season he played 13 games in Florida Panthers and in 2008-09 only 1 game.

All numbers, letters, sponsor patches and the IIHF patch are sewn. Individual letters on the name plate are heat pressed. The jersey is made by Nike.

The jersey was obtained from a private collector from Finland.
Return to IIHF jerseys I-L